As Wall Street wiz Schundler was departing, the Bergenline-suckled Stack was arriving.

But now the fates of these two offbeat and opposite antagonists of the Hudson County Democratic Organization (HCDO) have led them to Trenton and what the senator’s spokesman says will be an inevitable one-on-one encounter.

Today, Republican Gov.-elect Chris Christie announced his selection of Schundler to serve as commissioner of the state Department of Education (DOE).

“There are some philosophical differences that need to be resolved,” said Stack spokesman Mark Albiez, specifically referring to the issue of school vouchers, a Schundler signature, which Stack doesn’t support.

“At this point, Senator Stack is open to a discussion with Mayor Schundler,” added Albiez, when asked if Stack would consider invoking senatorial courtesy to block his fellow Hudson County resident.

Basking in the luster of a new, multimillion dollar high school construction project, Stack doesn’t necessarily want to hear about private school alternatives from that man the old school politicians here see as the Cory Booker of Jersey City: great at delivering riveting speeches but less than mechanically inclined when it came to riveting together the goods.

To his devotees, Stack prides himself on block by block constituent services and obsesses over his political base in full-bore BlackBerry mode while in committee in Trenton, while Schundler as a big city mayor by contrast projected eight years of White House fever, according to those sources here who have doubts about Schundler at the DOE.

But even though they’re philosophically at odds and maybe irreconcilably so on the subject of school vouchers, Stack and Schundler share the political history of having warred with the HCDO and – in his own way and for a time – won. 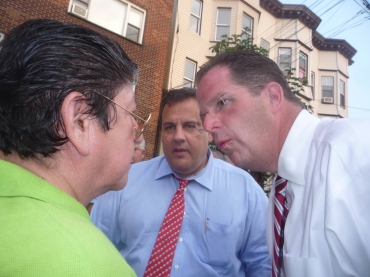