Making up for her accidental ‘yes’ vote on a bill forcing a 10-year waiting period on referendums that would change the form of municipal governments, state Sen. Loretta Weinberg (D-Teaneck) lobbied outgoing Gov. Jon Corzine to veto it.

On the last night of his term, Corzine’s office announced that he vetoed five pieces of legislation, including the referendum bill, which passed both houses of the legislature with the bare minimum number of votes.

But the next day, 13 minutes before Christopher Christie was sworn in as governor, Corzine’s office issued a revised list of bills he took action on.  There was only one difference between the new list and the one from the previous night, and it was not pointed out explicitly.  The referendum bill was moved from the vetoed list to the signed list.

“I lobbied him to veto the legislation, and I think that’s what he should have done. It’s bad public policy, it’s bad government, it’s bad politics,” said Weinberg, who ran for lieutenant governor on Corzine’s ticket and said that the move was a disappointing way for Corzine to depart the office. “To change the law to take Democratic action away form the citizens is to me a rather serious step.”

The bill was considered to be aimed directly at Empower our Neighborhoods, a Rutgers student-based reform group that in November narrowly lost a ballot question to change the way city councilmen are elected from all at-large to a mixed at-large and ward-based system.  That would, in theory, pave the way for some councilmen not aligned with the local machine.

Although the bill was sponsored in the assembly by Annette Quijano (D-Elizabeth), legislators reported that Assemblyman Joseph Egan (D-New Brunswick), who is also a New Brunswick councilman, lobbied the Democratic assembly caucus to vote ‘yes’ for it.

Yesterday, Corzine spokesman Josh Zeitz said that the governor had planned to pocket veto the legislation – letting it lapse by failing to sign it.  But after receiving a written pledge from the legislative leadership that they would author a compromise bill to change the 10-year waiting period to five years, he decided to sign it.

That wasn’t good enough for attorney Diana Jeffrey, who represents Empower Our Neighborhoods.

“Governor Corzine devoted a great deal of energy during his term to improving ethics, accountability, and transparency in government.  How unfortunate that he spent his final 12 minutes in office to sign a bill into law that will insulate the political machine of New Brunswick from the will of the people, when he could have gone out championing those rights instead,” she said.
Weinberg, for her part, said that she does not plan to wait for the legislative leadership to address the issue.

“I plan to put in a new bill to change that around,” she said. 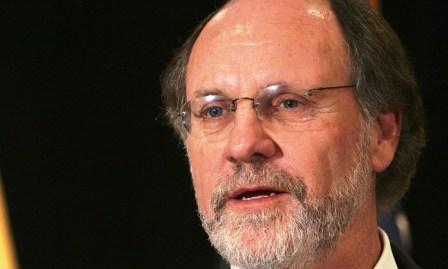