NEWARK – Repeatedly ribbed for his less than scintillating personality but chalked up as an effective local lawmaker, East Ward Councilman Augusto Amador stepped forward this afternoon as the mostly unsmiling but hardly unwilling Ironbound equation in Team Booker’s re-election strategy.

“I may not have the personality of the prototypical politician, but I’ve been around a while and I know that all it comes down to in the end is what can you do for the people you represent,” Amador told a room brimming with local political infrastructure, including several of his Booker Team running mates, the District 29 Legislative team, among them East Ward Assemblyman Albert Coutinho (D-Newark), and beloved local product Sheriff Armando Fontoura.

“There is no alternative out there,” Amador added. “Don’t look for any other candidates.”

Even as the councilman worked the room, however, challenger Peter Pantoliano walked the ward, trying to drum up support to pluck Amador out of City Hall.

With his campaign posters now plastered all over the ward as of earlier this week, Amador says he has the record to deserve people’s support for one more term, including his work to secure parks, schools and St. James Hospital.

“Since I don’t have a personality,” he cracked, “I’m going to get off the stage.”

With that, he introduced Mayor Cory Booker, Amador’s grinning and bubbly public presence antithesis in the fluorescent-lit room.

This East Ward Team Booker campaign HQ launch was one of seven events the mayor would later say he attended today. Not discounting the fact that he and his allies have opposition – retired Judge Clifford Minor’s Newark’s Choice ticket – Booker emphasized what he believes is a shift away from the street fight terrain of his past elections.

Once wobbly alliances have turned into cemented foundations.

“This is not an election about politics anymore, but progress made and work yet to be done,” said the mayor, who bullet-pointed city improvements and initiatives, including what he says is the nation’s largest charter school fund of $25 million, crime prevention cameras leading to the reduction of violent crime by 43%, major reduction in Ironbound auto thefts, the preservation of services at St. James Hospital and development of large-scale attractions like the New Jersey Nets at the Prudential Arena.

Booker said he knows the campaign will have its sour notes.

“But when someone comes up to you and talks smack, don’t talk smack back,” he said, “talk facts.”

Two days after the federal indictment his former deputy mayor of public safety, the first-term mayor admitted that he his team have made mistakes, but deserve re-election.

“I’ve got a man next to me who I learn from everyday,” James told the crowd moments before bear-hugging Amador.

Fontoura received the heartiest laugh of the afternoon when he told the councilman, “You’re the best councilman this community ever had, even if you don’t have a personality, and even if do you have to shave off that ugly moustache.” 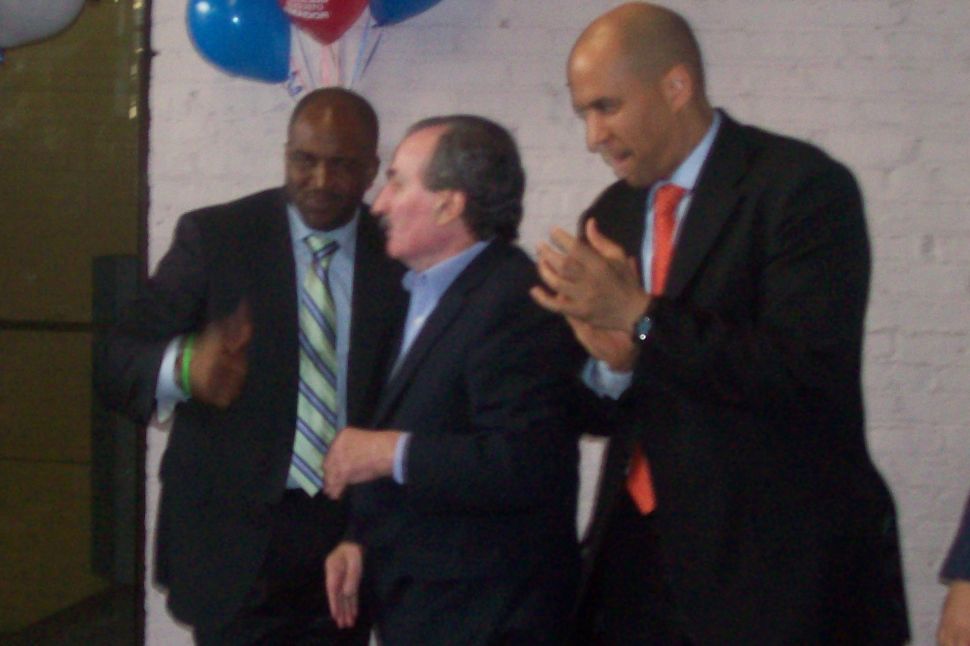