“You can’t get involved in every local race,” Doherty told PolitickerNJ.com. “I’m coming off a bruising 2009 myself, and for me, there are better targets to go after. Democrats, for instance. Rush Holt is a guy who immediately comes to mind. Listen, at some point you have to consolidate your gains. I do not think Leonard Lance can be beaten in a Republican Primary. Even if David Larsen won, he would be cut out in redistricting in 2012.”

Lance’s refusal to get solidly behind Doherty last year might have prevented some party primary agony, but Doherty insists he didn’t take it personally.

“I took his support of the GOP team in Hunterdon as his support of the party’s chosen candidates, I didn’t take it as him endorsing my opponent,” said the renegade upset winner over Marcia Karrow to win the 23rd District state senate seat Lance had occupied prior to his move up to Congress.

“It was a situation where he was willing to have his picture taken with candidates, and people stretched that to the notion that he provided a glowing endorsement of my opponent, but the fact is that he refused to do a robocall (for Karrow against Doherty),” added Doherty, who plans to stand on a stage with Lance tomorrow morning in Hunterdon in a moderate-conservative statement of symbiosis.

“Do we agree on all the issues, no, but to Republicans angry at Leonard Lance, my message is get on board with the Christie administration and take on guys like Rush Holt and John Adler to advance Republican principles,” said Doherty, who noted that Lance’s support in the state senate of voter approval for any new debt puts him in a special category.

“The fact that Steve is staying out of the race for Congress (in the 7th District) speaks volumes,” he said. “If Steve is not getting involved, then I don’t think he or his supporters can turn around and be angry at me for supporting Leonard. Look, we have a Republican governor, a great victory last year, and I’m sitting on the budget committee in the senate. Conservatives have a place at the table. In terms of the future of New Jersey, let’s consolidate what we have. If there are conservatives who are still ticked off after we elected Chris Christie, let them go after Rush Holt and John Adler, a much more fruitful and productive enterprise.” 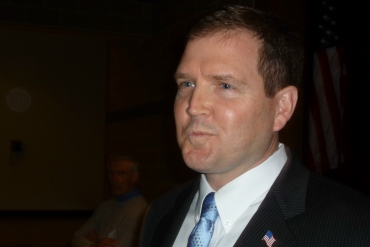