Baroni, a 38-year-old Mercer County Republican, will replace Susan Bass Levin, a former state Community Affairs Commissioner and Cherry Hill Mayor, who resigned in January to join Cooper Union Hospital.  The post is the top staff position for New Jersey at the bi-state agency, which operates the nation’s busiest airport systems, as well as the PATH rail transit system, six interstate tunnels and bridges, the Port Authority Bus Terminal, marine terminals and ports, and the World Trade Center.   The Port Authority has a $6.3 billion annual budget and has over 7,000 employees.

A Seton Hall University law professor, Baroni was elected to the Assembly in 2003 and to the Senate in 2007, where he has been widely viewed as one of the state’s rising political stars.  As a Judiciary Committee member, he emerged as one of the intellectual leaders of the upper house.  He was an early supporter of Christie’s bid for the GOP gubernatorial nomination last year.

Christie is taking public authorities seriously and putting allies in place to lead them. Ralph Marra, Jr., who was First Assistant U.S. Attorney during Christie’s seven years as federal prosecutor, was announced yesterday as the new counsel to the New Jersey Sports and Exposition Authority.  Another former prosecutor, Deborah Gramiccioni, is the head of the Authorities Unit in office of the governor’s chief counsel. 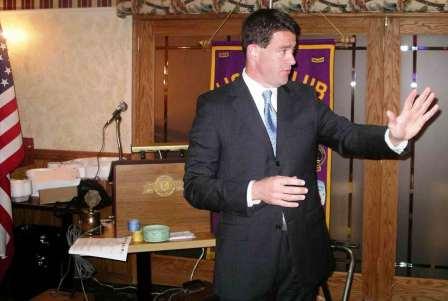