BRIDGEWATER – Springing no Tea Party surprise on fellow Republicans, Bridgewater Mayor Patricia Flannery today enthusiastically endorsed the re-election of U.S. Rep. Leonard Lance (R-Clinton), one among several allies unleashed by Lance as part of a first-day effort to obliterate right-leaning renegades from trying to gain traction against him.

Unlike Flannery, Lance is pro-choice.

But the mayor of Somerset County’s sprawling center piece town, who tomorrow plans to officially name a footbridge over Route 22 after a township soldier killed in the Middle East, said the congressman’s fiscally conservative record makes him an easy choice for her support.

“You don’t have a more fiscally conservative legislator than Leonard Lance,” Flannery told PolitickerNJ.com in her makeshift office on Route 287. “We’re talking about a former state senator who filed a lawsuit against Gov. Jim McGreevey over deficit spending. He called New Jersey state debt the Sword of Damocles hanging over the state.

“I am enthusiastically endorsing his re-election,” the mayor added. “Leonard Lance understands the United States Constitution and American history, something I sure patriotic voters appreciate.”

Virtually unknown Tewksbury businessman David Larsen launched his GOP Primary candidacy last Friday night to Lance’s right with the question, “Where has he been?” 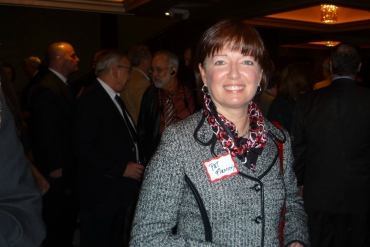