“I think my fellow assemblywoman Mary Pat Angelini (R-Wall) would make an outstanding challenger to Frank Pallone,” said Casagrande, who added that Monmouth County Republican Vice Chair Diane Gooch, the millionaire pubisher of the Two River Times, would also be “an excellent candidate.”

“I think we have really, for once, a lot of exciting options for people out there to run races against sitting congress people, which is not always the case,” she said.

Casagrande, who does not live in Pallone’s congressional district but represents part of it, made the comments to PolitickerNJ.com just before attending an Assembly State Government Committee meeting.  Minutes later, she was shaking the hand of Pallone, who was there to testify on the 2010 census.

Pallone, who has $4 million in his campaign account, says he’s heard nothing about his potential challengers except for what he reads in media reports.

Although sources say that Angelini was personally recruited to run by Gov. Christopher Christie, Gooch has won over the establishment with the promise of a campaign that will be at least partially self-funded.  Most insiders expect Angelini to step aside.

Four other people are considering running for the Republican nomination. 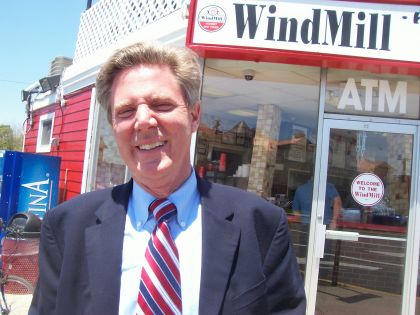