The public workers unions whose gripes Gov. Christopher Christie today compared to his nine-year-old son’s use of the word “unfair” fired back this afternoon, arguing that the new Governor’s aggressive approach would prove counterproductive.

“The approach Gov. Christie articulated today reflects anything but statesmanship.  We do have a tradition of statesmanship in New Jersey — open dialogue with stakeholders, working together to solve our problems, sharing sacrifice and not resorting to name-calling.  Gov. Christie has rejected that tradition with his refusal to meet the women and men who do the public’s work, his vilification of us as blameworthy special interests and his failure to ask the wealthiest New Jerseyans to do their fair share,” said a written statement issued by the group.

“Many school districts use the excess surplus funds from one budget year as revenue to support programs or property tax reductions the following year,” she said. “With this order, the burden is on the governor to ensure that he has adequate funding in his FY2011 budget to fund the public schools of New Jersey.” 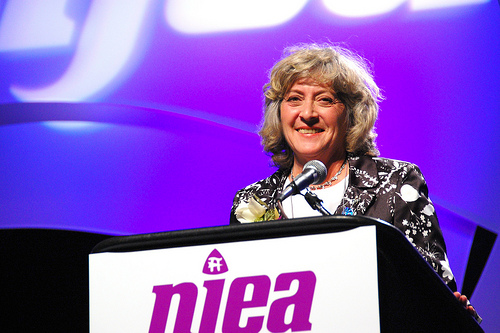