Not yet a done deal, Middlesex County Freeholder Mildred Scott is expected to announce her candidacy for sheriff in the wake of this morning’s news that veteran Sheirff Joe Spicuzzo will retire at the end of this year – a natural choice, say party insiders.

First elected in 2008, Scott is the first African-American freeholder in the history of the county and chair of the law and public safety committee. She has over three decades of experience in the sheriff’s office.

Raised in Perth Amboy, the Piscataway resident was the first woman to serve as chief sheriff officer (from 1991-1995).

Party sources said the expectation of Scott as Spicuzzo’s successor has created positive early vibes in some quarters because of her ground-level experience in law enforcement.

In the event she runs, “I would be enthusiastic about her candidacy,” said state Sen. Barbara Buono (D-Metuchen). “I have known her for many years and I have a lot of respect for her. Her candidacy sends the right message. It’s long overdue.”

But there is also the possibility that another Democratic candidate may want to get in on the race, and a formal Scott announcement appeared stalled Wednesday afternoon as party pooh-bahs tried to hash out a deal in circumstances complicated by a snowstorm.

In the meantime, Freeholder Jim Polos is ready to go, and retired State Police Captain Keith Hackett has already announced his Republican candidacy for sheriff.

Neither Scott nor Polos could immediately be reached for comment, but operatives in two key Middlesex towns: Piscataway and Woodbridge – where power players state Sen. Bob Smith (D-Piscataway) and Mayor John McCormac respectively reside – say Scott is a heavy favorite based on her resume.

One party insider described the Polos-Scott talks as an ugly fracas between old guard Dems who support Scott and new guard types who want Polos.

“I respect Polos for trying to buck the system and being independent,” said another Middlesex County source, “but there’s no way he can get county committee support to win.” 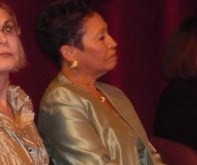