Remember that kumbaya moment at Gov. Christopher Christie’s swearing in, when he invited Senate President Stephen Sweeney (D-West Deptford) and Assembly Speaker Sheila Oliver (D-East Orange) to stand with him?  That feeling ended today in an eruption of partisanship over Christie’s executive order declaring a fiscal state of emergency.

Democrats, who for the last three weeks have been muted in their criticism of the new governor and vocal in their willingness to join Republicans in tackling pension reforms, accused Christie going around the legislature by forging ahead with the executive order, freezing $475 million in school aid, without their input.  Democrats said that amounted to a stealth property tax hike for many municipalities, and were having their lawyers review the legality of the order.

The Democrats had reached out to Christie, they said, only to be spurned today.

“If the honeymoon is over, it’s the Governor’s choice, because he’s choosing to govern by fiat and executive order, and not by bipartisan collaboration with the legislature,” said Senate Budget Committee Chairman Paul Sarlo (D-Wood-ridge), who called the school aid freeze a “gimmick” and pointed to a newspaper’s quote of Senate Minority Leader tom Kean, Jr. (R-Westfield) last year saying that former Gov. Jon Corzine’s similar but never implemented plan would “translate into school property tax increases across most of New Jersey.”

“We did this last year.  We had $4 billion last year at the same time.  And he has $500 million in surplus that he’s not touching, that he can use,” said Sarlo.

Kean responded that Corzine’s plan was vague and could be “rejiggered” for different municipalities, while Christie’s was uniform, specific and that, in targeting only school districts’ surpluses, it would not impact spending that had already been approved.

“I don’t know that the honeymoon is over, but clearly we’re on the plane ride home,” said Assemblyman John Wisniewski, the Democratic State Chairman.

The Democratic legislative leadership complained that they were left out of the loop on the cuts Christie planned to propose.

Speaker Oliver said that she and Senate President Sweeney had a 10 minute teleconference with the Republican legislative leaders, the governor and his staff, but were given only a vague outline of the plans.

Senate Majority Leader Barbara Buono (D-Metuchen) said she got the information for her caucus by walking in to the Governor’s outer-office at about 9:15am.

Republicans, however, said they were no more in the loop than their Democratic counterparts, attributing the slow trickle of information to the weather.  And Kean, who was also on the conference call with the Democratic leaders and the governor, said it lasted significantly longer than 10 minutes.

The GOP members’ feedback on the speech was uniformly positive.

“I think it was very clear and concise, and look, we finally have a governor who’s going to do what all the other governors promised to do but didn’t do,” said Assembly GOP budget officer Joseph Malone (R-Bordentown).

State Sen. Kevin O’Toole (R-Cedar Grove) attributed that Democrat’s criticism to denial about the scope of the fiscal problems facing the state.

“There’s going to be a certain sense of denial that the $2 billion really isn’t $2 billion… I think once we get past the denial part, we’ll get to the acceptance part and we’ll have to go to the solutions part,” he said. 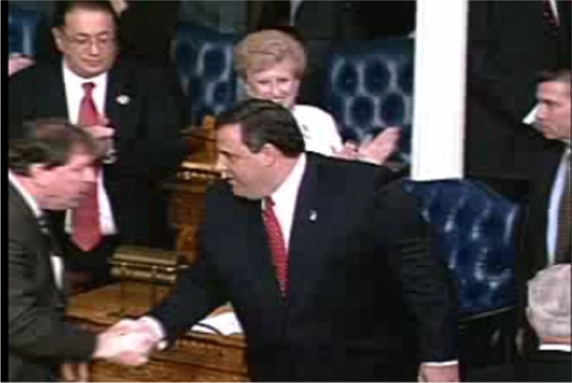