Despite a mostly snooze alarm response to the early machinations of this year’s municipal race, former Newark Mayor Ken Gibson wants Clifford Minor to be the next mayor of Newark, and thinks he can beat incumbent Mayor Cory Booker.

“Don’t forget, us quiet guys sometimes win,” said Gibson, 77, the first African-American mayor of a large Northeastern city who knocked off Hugh Addonizio in 1970 and served for 16 years before Sharpe James defeated him in 1986.

Gibson and Minor, a former Newark cop, judge and prosecutor, go way back.

“This is probably the most experienced and qualified person to ever run for mayor of Newark,” Gibson told PolitickerNJ.com. “Certainly, he has more law enforcement background than anyone else.”

Never a Booker supporter, Minor said the current mayor isn’t as keyed into Newark as the job requires, and questions the younger man’s temperament for the job.

“I’ve talked to Cory twice or three times since he became mayor,” said Gibson, a co-chair of Minor’s mayoral campaign. “He seems to me to have a difficult personality to even talk to. Nice guy, yes, if you can get close to him. He does not take advice very well and gets very defensive when people criticize him. He doesn’t have a relationship with the city, I believe.”

Gibson hears the early street-level criticism of Minor: that he’s terminally in low gear, that his voice can’t project up the next block, let alone take on tones of citywide victory without the big money amplification that Booker will enjoy.

“They said that about me, that I was too low-key,” said Gibson. “That’s the way we are. I’m an engineer by training. (Bob) Bowser (mayor of East Orange) is another typical engineer type. The Sharpe James types are great cheerleaders, but if you bring talent to the job real talent, such as Minor possesses, personality should not be an issue.

“Don’t even talk to me about money,” Gibson added. “Jon Corzine outspent Chris Christie 3-1, and he was beaten. Look at Michael Bloomberg, who for all his money nearly lost in New York from a guy they called low-key.”

A friend of Sharpe James’s despite their political rivalry, the former mayor said he eagerly anticipates James’s presence in Newark.

“We can use his help,” Gibson said of James, who’s officially due out of a federal penitentiary in August at the end of his 27-month incarceration term on corruption charges, but who is assumed to relocate to a Newark halfway house this month on good behavior. 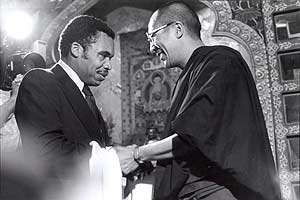