Haines, whose refusal was heralded by Republicans at the time as a noble act of self-sacrifice, today said he did not see it that way.

“I think when you listen to people that assumption is out there, but I give it little attention to because really, this is the kind of business where it might not happen.  And that’s a realistic possibility,” said Haines.

Haines said that there has been “no indication, no discussion” with the Christie administration about an appointment.

After Haines’s turned down Corzine’s nomination, members of the Democratic administration said they expected that he would by appointed to the judgeship by Christie sometime after September, allowing Burlington County Republicans to appoint a successor for his state senate seat to fill the remainder of his term (Republicans, according to the sources, feared a strain on their resources by a special election, combined with a competitive congressional race in the 3rd District and the possible opening up of the 7th District state senate seat, where Republican incumbent Diane Allen is battling cancer.

Haines, who acknowledged that he remains interested in a judgeship, said that there were too many unpredictable factors to make the appointment a sure thing.

“There may not be an opening, something may change in my life.  Anything can happen. I’ve been around long enough to know that,” he said. 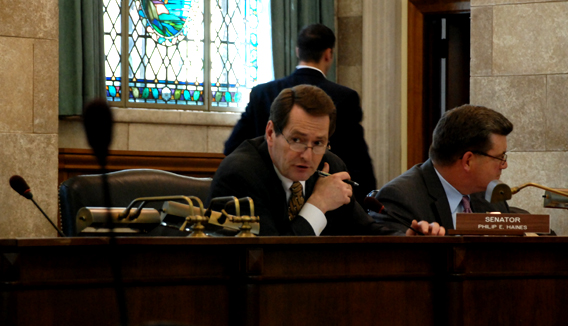