NEWARK – Mayor Cory Booker’s antagonist in their top-of-the-ticket contest may have decided to remain subdued in response to today’s federal indictment of Booker’s former Deputy Mayor Ron Salahuddin, but at-large candidate John Sharpe James, an ally of Minor’s, had no problem analyzing the incident as everything wrong with the Booker administration.

“Cory Booker has been everywhere but Newark – giving speeches at colleges for $10,000 and showing up at the Grammy Awards,” said the candidate. “All of that means nothing when you’re not taking care of home and Newark residents.”

The indictment puts Salahuddin in scheme mode as early as 2006, just weeks into Booker’s tenure, meaning that the new mayor’s man in charge of public safety on the front end of his job in the Booker administration was trying to figure out how to make money rather than drive down violent crime.

Big problem, said James – not only for Salahuddin, but for Booker.

“There was no concern for public safety or a progressive agenda here,” added the candidate, who dismissed Booker’s efforts today to take crime-fighting credit for cooperating with the feds in short-circuiting Salahuddin.

“First of all, Booker says there have been 19 indictments and 19 convictions in his administration, but most of those he’s referring to were city workers involved in stealing gas,” said the son of former Mayor Sharpe James, jailed on corruption charges in 2008.

The indictment reveals at least one other unnamed cabinet-level official cooperating with Salahuddin.

The fact that the feds brought the matter to Booker’s attention, not the reverse, makes it hard for James to see Booker as anything other than missing in action, complicit in the investigation only after an unraveling in City Hall.

For all of James’s zeal, the absence of Minor in the aftermath of the Salahuddin announcement furrowed the brows of more than several Newarkers on both sides of the mayoral contest. Why wasn’t the challenger at a makeshift podium in front of City Hall demanding a mop up?

“We’re not here to go tit for tat with Booker,” said James, in defense of Minor’s strategy. “We’re not here to have press conferences and command cameras. Booker has the media locked up. We’ll let him do that. We’re not going to get attention and we’re not going to outspend him. But we had 200 people at our community meeting tonight and, yes, we talked about the indictment. We’re going to win this campaign 100% on the streets.”

Alert to the potential for more indictments, James said he believes Salahuddin is just the beginning.

“We have to see what the federal government does,” he said. “Who is that high ranking Newark official? This clearly tips the scale. Cory Booker can’t say there’s no corruption in his administration and he can’t say he rooted out the corruption.

“It’s a night and day comparison,” added the son, when asked about Salahuddin and his father’s entanglement with the feds.

Although a jury saw it differently, the younger James said James confidante Tamika Riley received the right to acquire and renovate city properties only after the City Council approved her application to the city.

“This indictment today has someone scheming to gain income from City Hall,” James said. 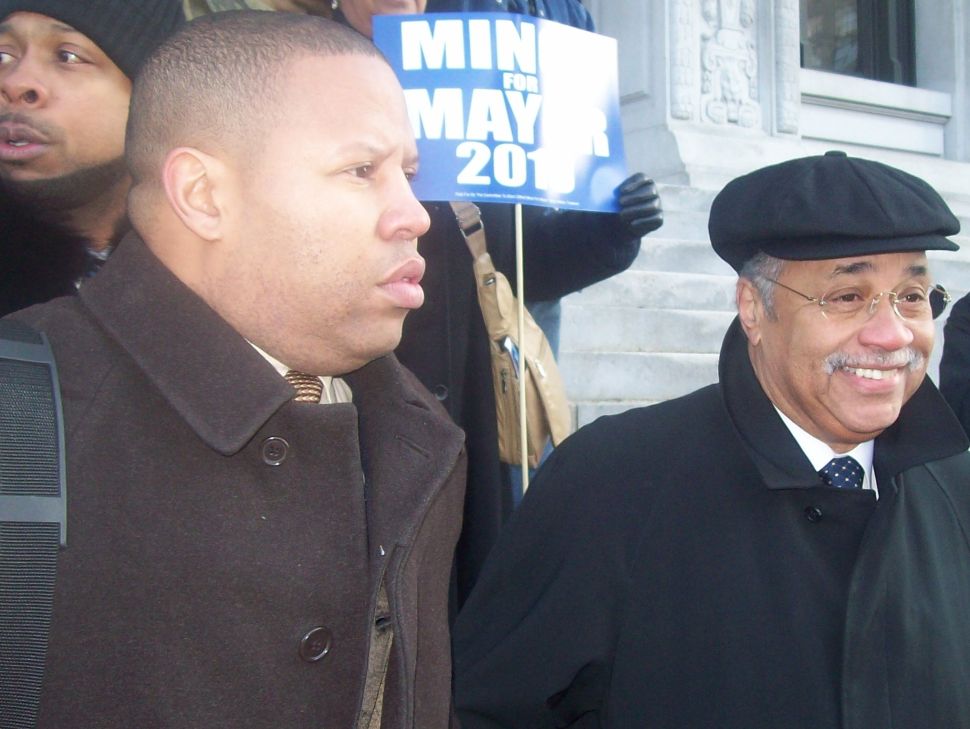