NEWARK – In a city with a hard-nosed history and just as jagged a present, in the midst of a national economic outlook threatening to spiral further downward, Mayor Cory Booker, by turns joyful and grateful, tonight proclaimed “a sense of sacred idealism” in his fourth State of the City address at Symphony Hall, a piece of election year oratory that crystallized Booker’s first term and his designs on the future.

Delivered in front of a full house with police on horseback watching a softly falling snow outside on Broad Street, Booker plugged his team in City Hall, the governing body, and citizen watchdogs for their collective crime-fighting efforts.

“Today, after millions of public and private dollars invested, a dramatic increase in officers hired, the implementation of new police strategies and technology, and thousands of volunteer hours, I’m proud to report that in Newark we are driving down crime in historic proportions,” said the 40-year old mayor. “If you remember, in 2006 there were 435 shootings and 107 murders in our city. Every year, we drove down the shootings in Newark and in this past year we had 177 fewer shootings, so despite the predictions of experts that the best we could hope for was a 10-15% reduction in gun violence, we in Newark, working together, have driven down shootings 46%, murders 28%, and driven down overall crime by 21%.”

As his campaign allies prepare to walk him through what they say is the token opposition of former prosecutor and judge Clifford Minor, part of Booker’s sales pitch is that his particular brand of phenomenon politics has delivered an unprecedented amount of private funding to the city. Booker highlighted a celebrity roster of contributors, including Oprah Winfrey, Queen Latifah, Brad Pitt, Jon Bon Jovi and others, including some of the country’s largest education funders: the Gates Foundation and the Walton Foundation.

He happily announced the downtown construction of a Courtyard by Marriott Hotel – the first new hotel in 38 years – drew loud applause when he promised to suit up for March Madness coming to Newark for the first time when the city and Seton Hall host the NCAA Men’s Basketball East Regional round at the Prudential Center; and boasted of Pitney Bowes’ decision to build a major mail services facility in the South Ward.

“We are ensuring that our children arrive at school healthy and ready to learn by improving our immunization rates and succcessfuly working to reduce lead posioning,” said the mayor. “I’m proud to tell you that the White House just announced today that Michelle Obama has aksed me to serve as one of two co-chairs to lead the first lady’s national campaign to combat childhood obesity.”

With one local election year eye on that southern frontier, where Councilman Oscar James II hopes to withstand a challenge from former Deputy Mayor Ras Baraka, Booker vowed to continue “to invest in new police facilities like the state-of-the-art precinct under construction in the South Ward, which will also house the city’s new emergency management center.”

“I want to thank our entire council, especially Councilman Oscar James, for helping to ensure Newark residents participate in the development of this multimillion project. He has been in my face and in the contractors’ face to make sure we build that project with Newark labor.”

Throughout, the mayor did all the requisite ceremonial stroking and ego soothing, peppering the speech with shout-outs to department heads and dignitaries, in addition to doing his part to diffuse the opposition charge out there that the nine-member city council is by and large a somnolent rubber stamp.

“Even when we disagree, we remain committed to our common ideals and central mission: to set a national standard for urban transformation in three areas: economic opportunity and improving the lives of children and families,” Booker said.

“Congressman Donald Payne, who does not get enough credit,” he said, prompting a round of applause for the elder statesman, before borrowing a recent description he used for DiVincenzo and calling Assemblyman Albert Coutinho (D-Newark) a “bulldog.”

Booker also propped Gov. Chris Christie (who was not in attendance) when he said, “We have the strong backing now of a new governor who understands the importance of public safety and has pledged his support to help keep Newark safe.”

Running a law and order guy campaign against Booker, Minor stood on the steps of City Hall at his campaign launch late last month and accused the Booker administration of tinkering with crime statistics to make Newark look better than reality.

“Crime is off the hook,” yelled the challenger.

But the mayor tonight projected unyielding optimism and conviction in the job he’s done since burying state Sen. Ronald Rice (D-Newark) in the 2006 mayor’s race.

In the aftermath of that lopsided victory and on the early inside of City Hall, Booker immediately ran into turbulence. He told the Star-Ledger at the end of his first year in office that he felt somewhat beaten up – just before walking into a horrific summer crime wave. His second year in, he bounced back on a surge of Obama mania as the presidential candidate’s most visible local rep, while struggling politically locally but making crime reduction with a new police director an overriding focus, and fighting the perception that not much had budged in that regard since the Sharpe James years.

Dogged by the charge that he’s a climber who’s using Newark as a springboard to political paydirt, Booker tonight voiced only resolve in the cause of Newark.

“Serving as your mayor and championing our cause has been the greatest single privilege of my life,” said Booker, doing the Reagan routine with a parade of people as civic symbols, calling names out one by one to highlight a handful of regular spirit-citizens for their respective voluntary contributions to the city.

“I feel that for the last four years I have been the luckiest man in America and you in the city have made me the proudest mayor in our nation,” said the mayor. “This job – as the council people know – hasn’t always been easy, and there have been many sleepless nights. But I am always reminded that I’m not alone in this fight. In many ways, I have been one person among many leaders, one servant amongst many servants who inspire me to be better every single day; I am thankful to be one in a number of people who are working to pursue our shared mission and sacred ideals – a sense of sacred idealism.”

Long a forum for big night political stagecraft in Newark, the state of the city address with Booker at the podium has for four years held that much more allure, given Booker’s celebrated public speaking skills. His staffers distibuted a thickset speech titled “We are Newark” that was actually – relievedly – broken up into double spaced and truncated prose poem lines reminiscent in appearance of William Carlos Williams.

In a comparatively close quarters setting, Mayor Brian P. Stack’s 2009 Union City state of the city address had all the atmospherics of a blackbox theater production of MacBeth, with the mayor entering like a Celtic hero to speaker-amplified war whoops on a stage dense with rising fog. By contrast, Mayor Wilda Diaz in Perth Amboy last year year opted for a more traditional high school auditorium setting and heavy ceremonial reliance on uniformed children singing pitch-perfect hymns.

Production-wise, Booker’s state of the city transmitted some splurge effects, with Booker’s live action face at the podium cinema-sized on a screen, juxtaposed with timed shots of his subject matter – but gaudy elements were otherwise minimal if outright absent, even if the presence of a faithfully chronicling “Brick City” television camera intensified the potential for high blown performance.

Some audience members grunted about Booker missteps on the job, including some bad early appointments in City Hall that yielded nothing but trouble, and groused that few of the accomplishments noted in his speech occurred prior to the last eight months. They worried about imminent layoffs at City Hall, which undoubtedly would come after – not before – election day. Men in cold weather clothing and wearing sandwich signs with Minor’s picture on them tried to grab the attention of departing audience-members with shouts of “Crime is up,” but radiated no deep street presence.

The mayor pulled Councilman James up of his chair into a one-armed hug after the speech.

To his allies, Booker has been an inscrutable public presence, if almost Queequeg-like in his focused pursuit of an elusive object: namely a revitalized Newark, while detractors remain convinced he’s only eyeballing the next strata of stardom.

“He’s the right man for the job,” said DiVincenzo, a Newark native who stood among the hard-clapping crowd for the finale. “We’ve always been allies, like brothers. I think the city is clearly moving forward with Cory at the helm.” 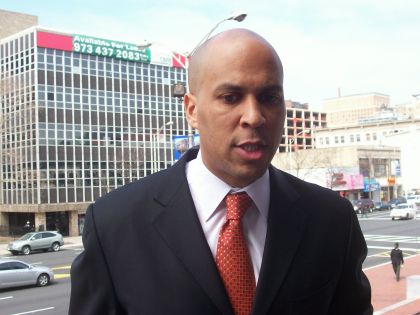