HILLSIDE – Sworn into office in front of a cast of attendees proud to welcome him to the ranks of area renegade political figures, independent Hillside Mayor Joe Menza still doesn’t discourage the image of himself in this Democratic town as Chris Christie in miniature, acting out at the local level what the new governor is attempting to do on a larger scale in Trenton with a legislature dominated by the opposing party.

For ground-zero Menza foe and Union County Democratic Chair Charlotte DeFilippo, it’s an unacceptable comparison – even when she considers the antagonistic potential of a surging statewide Republican like Christie.

“An insult to the sitting governor,” DeFilippo said when asked to comment on the parallel lines running through Menza and Republican Christie’s political careers. “I can’t let you say that, that’s an awful insult, I’m not joking. Stop.”

As Christie last week presented his proposal to the Democratic Party-dominant legislature to close a $2.5 billion budget gap, the Hillside Township Council, 6-2 in favor of Team DeFilippo, wrangled over a $42 million budget with a proposed 6.5% tax increase, which Menza wants chopped.

Despite the on-paper edge for DeFilippo, the council stalemated, 3-3-1.

“You think Hillside is immune to everything that’s going on around us?” asked Menza. “A Six percent increase? Really? Let’s take a closer look at that 60% of the budget compacted with salaries, wages and perks.”

“Come on, let’s get real here,” said the lifelong Hillside resident, who’s now gone near to nuclear on three successive local mayors. “You have a brand new mayor who has no idea about this form of government, about advise and consent of the council.”

The party chair said that all while howling about the budget and existing government infrastructure, Menza has long run the School Board with bloated-budget allies and as mayor has himself tried to front-end load a team of unqualified undesirables and siphers for governmental positions, including discarded DeFilippo operatives turned against the machine, state Sen. Ron Rice bandidos, and assorted outcast political collateral from Plainfield, Newark, Roselle, and Jersey City.

“He’s crying about us, and this is a guy who brought in (former Jersey City Mayor) Gerry McCann (jailed for fraud) as his financial advisor,” DeFilippo said. “You know what I mean? He’s surrounded himself with people who are slightly off-kilter. Instead of sitting down and working with the council, he brings a myriad of screamers, out-of-towners and jumper-upper-downers, all indicative of what must be some strange joy he derives from creating havoc. Public meetings are to do public business, not create side shows.

But Menza said the council dead-locked on the budget only after two of DeFilippo’s organizational allies refused to vote yes: Councilman Frank Deo, who voted “no,” and Councilwoman Angela Garretson, who abstained.

“They know there’s something wrong with this budget,” said Menza (who’s a second cousin of Deo’s, incidentally), whose other worry is the majority council’s apparent decision to delay the town’s pension loan payback until 2012, a tactic that will jack taxes in a big way a year ahead of Menza’s re-election.

In the meantime, “I think we need time to review this budget proposal,” Garretson told PolitickerNJ.com. “We don’t want to jeopardize the people of Hillside, and by June I want to be able to stand with principle in support of a budget.”

“I did not see any significant budget cuts,” said Bates, in explanation of her “no” vote. “People are drowning here and rather than throw them a life jacket we throw them a load of bricks. They claim we have superior services, and yet, when I look at our community center and our library, they are in terrible shape. So what are we providing of substance? If this town empties out, what will they be protecting?”

His discomfort with the budget in an economic downturn should not be interpreted as irreversible dillusion with the local Democratic organization.

She also denies that as long as she and Menza battle – a battle without end, apparently – her hometown is doomed to tit for tat obstructionism.

“People who are not competent won’t be in government here,” she said. “The council will never pass someone who failed at two or three businesses and went into bankruptcy as the business administrator. I’m sorry. They’re never going to pass Gerry McCann as the borough financial adviser. That’s unseemly. That does not bring you credibility. I’d be embarrassed. He could be as bright as a button, but he is problematic.”

Bates argues that it’s difficult for her not to sympathize with Menza, however; especially when an elected official, no less a mayor, can’t appoint anyone to be on his staff.

“Imagine a governor getting elected and not being able to appoint anyone,” Bates said. “Micro-scale, that’s what’s happening in this town. This is a mayor with no lawyer, no BA, no aide to the mayor.”

If Menza can likely find no friend in DeFilippo, he conversely and predictably enjoys a willing partner in the governor’s office.

“I requested a departmental audit from Joe Doria (the Department of Community Affairs director under former Gov. Jon Corzine), and I never got a reply,” Menza said. “Now, I’m getting a reply. That audit now is definitely imminent, especially in light of the council’s rejection of the budget last week.”

As for the governor’s office chopping $400,000 out of Hillside’s Urban Enterprise Zone street sweeping program, Menza said with a shrug, “Really, I don’t disagree with the guy. If you saw some of thesse municipal salaries, you’d head for the hills. The high end is $194,000 for the police chief, but you’re talking about a lot of people in the $150,000 to $194,000 range.

“Christie gets it,” added Menza, who has cellphone contact with the Republican governor.

In spite of her good relations with the mayor, grassroots Obama-head Bates agrees with others who say Menza’s toe-to-toe tendencies – again, another early corollary with the sacred cow-smashing Christie – could burn him out in a war of attrition with the redoubtable DeFilippo.

“Joe’s style is to fight fire with fire, and perhaps that’s what’s needed,” said the councilwoman. “I’d just hate to see one side go to napalm or an atomic weapon. Honestly, I’m sure in their own way, each wants what’s best for the town. They just need a redefined vision of what this town is.”

Even though DeFilippo can’t choke down the Christie-Menza storyline, at least one other Democratic power player sees the Hillside mayor as a walking bellwether, and has seen it from the beginning; for when Menza defeated the vaunted Democratic Party machine in Hillside by six votes last year, Newark North Ward leader Steve Adubato, in high alert mode, grabbed a phone.

Never wholly disinterested in what to most Essex pols is the sometimes forgotten southern frontier of the 29th District – that Newark-centric political terrain overseen by his protege, state Sen. M. Teresa Ruiz (D-Newark) – Adubato had put some soldiers on the ground in Hillside to back up DeFilippo’s local Union County troops in support of DeFilippo’s Democratic mayoral candidate.

And he wasn’t the only potent entity outside Union intent on the outcome of the Hillside mayor’s race, for the Democratic Governor’s Association had also contributed financial resources to fend off the utterly unknown Menza on this unlikely battlefront.

But the real estate agent who received support from the Republican Party and a personalized robocall from Christie, weathered a general election and gutted through a runoff to improbably buck DeFilippo’s candidate.

He was considering the governor’s race, then five months away, and incumbent Jon Corzine’s prospects against Christie.

“Interesting,” Adubato said again, alert to the macrocosmic implications of Menza’s victory in the little side pocket urban burgh bulldozed beyond the limits of Elizabeth and left clinging craggily to the lower industrial edges of Newark.

Of course, Christie went on to beat Corzine.

She thinks Holley will be fine.

Regarding Bunk’s chances, “I believe the Democratic Party in Linden is stronger than it’s ever been,” said DeFilippo. “I think that while Linden has always been extraordinarily service-oriented, it’s lost some of that luster with Gerbounka. Bunk speaks to the people’s needs. I’m very optimistic about the Democratic Party. It’s a very important election, first for Linden, and for Democrats.”

Smith, a renegade Democrat who sat among those dignitaries at the front of the ceremony when Menza took the oath of office last year, continues to rejoice in the alternative Union County alliance provided by himself, Menza and Gerbounka, all of whom have the common headace of a municipal council controlled by party organization Democrats.

“We have very independent spirits in that we built our organizations locally and through grassroots efforts and we have a common bond in that we haven’t taken any donations from the machine,” said the Roselle mayor of the trio. “We are not beholden to the machine and because of that we feel we are connected politically and also on social issues. We are all going through the same things.

“In Roselle, we have gone through three cfos (chief financial offciers) in the last six months, which as completely destablized our financial department,” Smith added. “Our tax bills are coming out late. The whole situation’s hurting our cash flow.”

Smith said he believes Gerbounka will win re-election, in part because Derek Armtead, an African American Democrat and candidate for mayor, will break apart Bunk’s base.

Focused on Hillside, Menza, like Smith and Gerbounka, is nonetheless eager to engage DeFilippo – where he can – beyond their home turf.

“We need a watchdog on the freeholder board,” he said. “We need someone up there who can break the ice a bit. I know they’re going to say I’m a Republican. I’d like them to show me if I’ve ever voted in a Republican primary. I’ve been an independent since I was 18. What this is, is if you’re not on Charlotte’s team, you’re a Republican.”

Loosely aligned with Menza against DeFilippo, Bates is, of course, no Republican and no Christie sympathizer.

“Politics makes strange bedfellows,” said the independent Democrat. “I don’t like what i see in Union County. There’s a lot of wasteful spending – almost a million to renovate a dog run. Now, they turned that down after the public outcry, but now they want $1.2 million to renovate a barn in the Watchung Moutains for a meeting space. People have lost touch with basic services. How about a couple of new benches that don’t sink into the ground? In Hillside, we are a microcosm of what has gone awry.”

For now, that’s enough to make Menza a worthy ally, just as Menza nurtures other allies, one in particular, in Trenton, with whom he identifies, as a battling DeFilippo argues that Menza’s ultimately too renegade to maintain anything other than loose and local outcast ties. 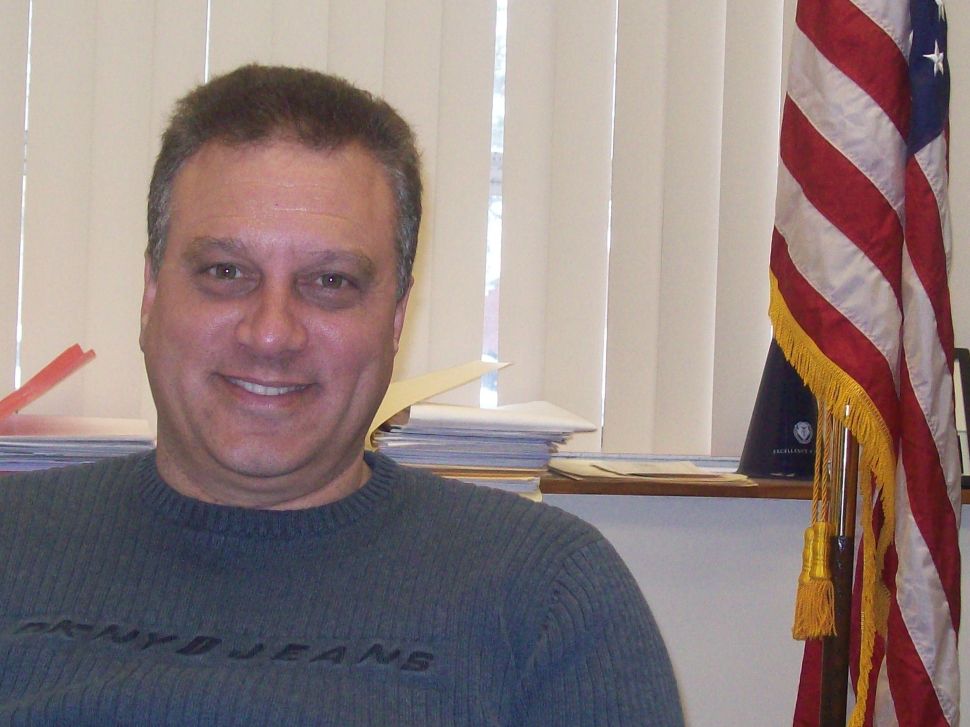