An insidious form of partisan politics has crept up from Washington and found its way into the New Jersey Statehouse, according to former Gov. Thomas H. Kean.

“Whatever disease in civility in New Jersey came from Washington,” he said, recalling Sunday afternoons in 1940s Washington when his father, Republican Congressman Robert W. Kean, would host his committee’s Democratic chairman in his living room, and when two Democratic congressmen endorsed his father’s unsuccessful U.S. senate run.

“That’s unimaginable today, those kinds of friendships across the aisle,” said Kean.

Kean’s laments about the lack of bipartisanship in modern governing came at a Monmouth University forum called “The Politics of Civility,” where he, lobbyist Michael Murphy and gubernatorial biographers Alvin Felzenberg and John Wefing recalled a bygone era in front of dozens of college students who are coming of age in the era of YouTube and the 30-second sound bite.

The focus of the forum, hosted by former EPA Region II Director Alan Steinberg — the university’s public servant in residence – was on the gubernatorial administrations of Kean, who served between 1981 and 1990, and Richard J. Hughes, who served as governor between 1962 and 1970, and as chief justice of the State Supreme Court between 1973 and 1979.

Murphy, a former Morris County prosecutor who ran for the Democratic nomination for governor in 1997, is Hughes’ step son.

“Incivility has become, in my judgment, a cancer on the American political process,” he said, recalling how his stepfather, a Democrat, and then-Senate President Charles Sandman, a Republican, had a contentious political relationship but remained friendly and, in the end, “accomplished a lot.”

Hughes would frequently call meetings with both sides of the legislature.

“Every meeting began with Governor Hughes saying to both sides ‘Well ladies and gentlemen what are we going to do for the people for the State of New Jersey this time,” said Murphy.

Kean, for his part, attributed the partisan nature of governing to the influence primarily to two factors: money and safe congressional and legislative districts.

“When I was growing up as a congressional child in Washington, congressmen worked six-and-a-half days a week, generally…. It didn’t matter if you were Republican or Democrat. You went to the same parties. Your children went to the same schools,” said Kean.  “Now, Congress comes down on Tuesday morning, and they leave on Thursday after the session.  The night they are in town, they attend various fundraisers to raise money for themselves or somebody in their own party. It’s changed. It’s not the same.”

And the safe districts, Kean said, had made it nearly impossible to get elected as a moderate.

“Now if you do go out and talk to the other party, you get primaried.  If you disagree with your party, as Joe Lieberman did, you’re going to get a primary. If you talk to much to the party, as John McCain does, you’ve got a primary now,” he said.

Wefing, a professor at Seton Hall School of Law and author of The Life and Times of Richard J. Hughes: The Politics of Civility said that he has high hopes for Gov. Christie, who engaged in some political bomb throwing during his transition into office — most notably calling Assemblyman John McKeon’s (D-West Orange) bill to restrict the way the governor can appoint U.S. senators “garbage” and “political lying– , but who also invited the two Democratic legislative leaders for a “handshake of resolve and friendship” at his own swearing in ceremony.

“We can only hope that today we’ll see a movement back to the days of Governor Hughes and Governor Kean,” he said.

Felzenberg, who authored Kean’s biography, noted that the Kean and Hughes worked together.  When Hughes was governor, Kean, a legislator, helped pass key parts of his urban aid package.  And when Kean was governor, Hughes served on a commission to help him on prison bonding.

“It’s possible to push back,” said Felzenberg, who argued that the 9/11 Commission – chaired by Kean – became popular with the public in part because it appeared that Kean and his Democratic co-chair, Lee Hamilton, were serving the public over their personal politics.

The panelists did not challenge the notion that partisanship had increased over the last several decades.

Nancy Byrne, the daughter of former Gov. Brendan Byrne, backed them up on that point.

After the forum, Murphy acknowledged that campaigns had been “insanely ugly” even hundreds of years ago.

“Campaigns were, but I’m not sure governing was as ugly,” he said, arguing that the situation has been further aggravated by the need to make an argument into a 30-second sound bite.  “When you take the campaigning into the forums of government, that’s where it really breaks down.” 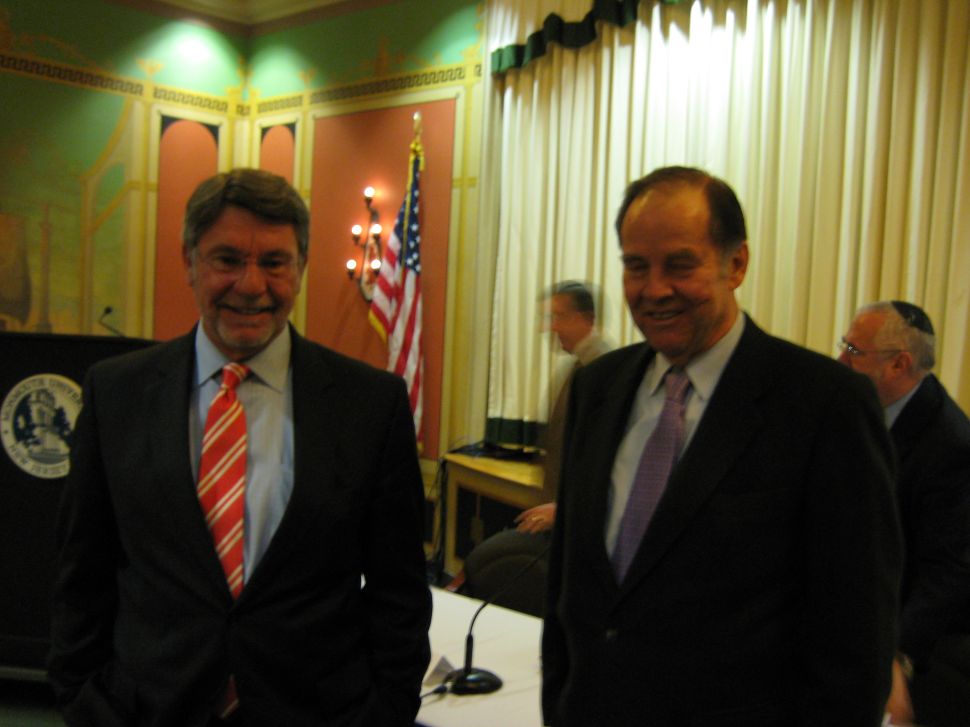