OLDWICK – He drives a Ford Expedition with 240,000 miles on it, which he calls “Moose,” owns a .16 gauge shotgun and a .30-06 – for deer hunting – and when he grips the hand of a supporter at his campaign kickoff at the Oldwick Volunteer Firehouse, the other man’s face crinkles into a broad grin at the feel of calluses on the hands of David Larsen, owner of a windows and doors business, and a candidate for U.S. Congress.

“I would never have guessed just a few years ago that I would be here tonight, making this announcement, making this commitment,” declared Larsen, standing at a podium Friday night in the belly of the station house in front of a modest but animated crowd of 50 people.

“I also don’t think any of us could have predicted just a few years ago the challenges we would face as a nation or how our politicians would react to these challenges and how thoroughly they would disappoint us,” added the candidate, whose businessman’s Obama era outrage spills into his own party.

The GOP object of this long-shot, Tea Party-affiliate’s disappointment is incumbent U.S. Rep. Leonard Lance (R-Clinton), who served for three decades at the Statehouse before gritting through a Republican Primary in 2008 and then beating Assemblywoman Linda Stender (D-Fanwood) 51%-41% in the 7th District general election. The moderate, pro-choice Lance’s victory over Stender came two years after Stender had come within two points of upending the more conservative, pro-life former U.S. Rep. Mike Ferguson.

“But the times have changed,” said Larsen.

A month after a nobody named Scott Brown drop-kicked the Democratic Party U.S. Senate candidate in Massachusetts to win the late Ted Kennedy’s seat, Larsen’s Republican Primary compare-and-contrast campaign war cry provoked a standing ovation at the end of his roughly 15-minute address.

The Brown-like gist of it is that Lance, son of a politician, has himself been a politician all of his adult life and consequently cocooned himself outside of the experience of most of the district’s residents; while Larsen, the son of Norwegian immigrants who emerged from a one-bedroom apartment in Brooklyn, started his own business at 20 and grew it big enough to employee hundreds of people through the years, make plenty of money and move to Oldwick around 15 years ago – knows the Route 22 terrain of everyman.

Even if he owns what he describes as a “gentleman’s farm” in Tewksbury, where he raises American quarter horses, he did it the Horatio Alger way, explained one supporter in attendance at the firehouse last night, and has the requisite grease and spackle dust under his fingernails to play in Union and Middlesex, and simultaneously just enough dirt and saddle sweat under the nails to harness votes in Somerset and Hunterdon.

“I am not a politician, having been an entrepreneur all of my life,” said Larsen, married with three daughters. “I am not a Harvard MBA or lawyer, and I never worked for a big Wall Street firm. I have no ties and owe no favors to big business, so I have no political obligations, nor do I want them. …A few years ago, I may have considered this to be a handicap for someone who would pursue a political office. I no longer feel that way. I felt this way because, like many, I thought the answer to our problems was to elect ‘good’ politicians.’

Asked to name one in his short Congressional career, Larsen’s supporters say Lance’s worst transgression as a U.S. Congressman was his support of the cap and trade bill, a President Barack Obama pro-environment initiative aimed at limiting carbon omissions, which would auction off permits to those entities emitting carbon dioxide gasses.

Larsen said he would have done everything in his power to try to stop that bill dead in its tracks.

“People don’t want this stuff rammed down their throats,” he said. “If I were there, you would hear me. My question is, ‘Where is this guy?’ Someone stand up!”

The protective presence of a fierce conservative like Doherty, a supporter of Steve Lonegan over Chris Christie in last year’s gubernatorial contest, and named the number one conservative in the state by “Conservatives with Attitude” last week, smothers the notion that a rightward candidate could gain traction against Lance, or at least that’s the expectation from Lance’s allies.

Predictably, Larsen’s people seem unconcerned by the infrastructure of longtime elected officials in the congressman’s corner.

“The greatest problem we face,” Larsen said in his speech, “a problem that threatens the future of our representative government is that we have developed a political class of career politicians. The result is a cookie cutter version of political bureaucrats, no matter what party they are in.

“In Massachusetts, with the election of Scott Brown, we recently observed the people triumphing over the political class,” he added. “The politicians in Massachusetts didn’t recognize that a representatives seat is ‘the people’s seat.’ They felt this way because they believed that generations of politicians from one family entitled them to own that seat. They think they are entitled. …Well, they are not entitled to your money, and they most certainly aren’t entitled to your freedom. And they are not entitled to their office, even if they have the word ‘incumbent’ in front of their name.”

Asked if he anticipates calling for debates with Lance, Larsen said, “No, I don’t think so. He’s a far more polished debater.” Asked about whether, if elected, he would impose term limits on himself, the candidate said, “It’s very possible to go with something like that. Between Congress and U.S. Senate, 12 years total might be a good idea.”

He’s willing to inject $300,000 of his own money into the contest, he said. Lance right now is operating with over half a million in his campaign coffers but has access to deep fundraising contacts in the Republican Party.

Seventh District Democrats, meanwhile, feel mostly cowed by a political environment nationally that has shifted against their party and put them on defense. The only declared Congressional candidate so far is Ed Potosnak of Franklin Township, an aide to U.S. Rep. Mike Honda.

Businessman (and Somerset County Democratic Organization Vice Chair) Zenon Christodoulou is still undergoing the agonies of trying to figure out if he will get in the race, according to sources. The Democratic Congressional Campaign Committee (DCCC) wants him in, but friends and local political associates are telling Christodoulou that if the atmosphere is tough for Dems right now, it’s toxic against a moderate Republican like Lance.

Yet for the rightward Larsen, that “moderate” pro-environment tag is a Lance liability in a Republican Primary.

“I will listen to you, I will be a voice for the people, your voice, and I ask for your vote in the Republican June 8th primary, and again in November, so that I can be your voice in Washington,” he said, just before his supporters emptied their seats in a hearty standing ovation. 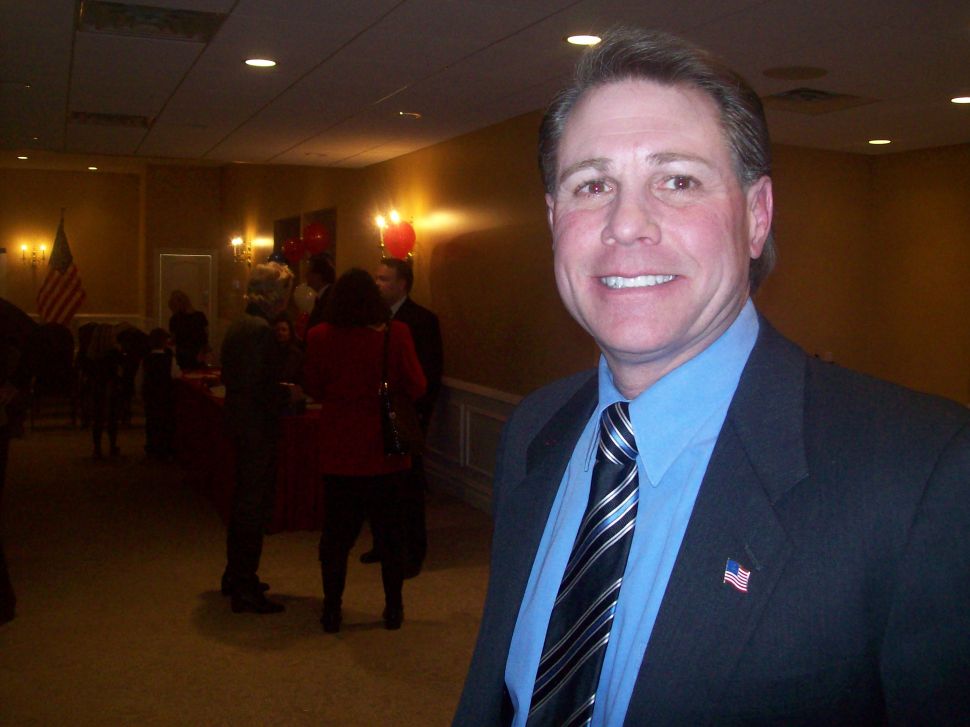