That’s because shortly, the little city halls occupied by Booker allies in all the five wards will empty and converge on Symphony Hall as Newarkers – tantalized by the prospect of bridge and tunnel projects, promised but not yet underway, and buffeted in the meantime by an unemployment rate of 17% – will gather to hear incumbent Mayor Cory Booker deliver his fourth State of the City address three months in front of Election Day.

“Like any other city we are in midst of a recession,” said Assemblywoman L. Grace Spencer (D-Newark). “We are struggling to rebound from this recession. We have a record number of citizens who are unemployed, but we are trying to be entrepreneurial and to create employment opportunities. We are trying to empower people who have small businesses with small business loans and contracts and encouraging new businesses to open.”

“My only problem is the economy right now,” James said. “But we are laying the foundation right now for future economic development.”

Running in what many observers believe will be a singularly competitive ward race, the councilman considered the Booker administration’s three most important achievements.

“I would say overall commitment to crime reduction and safety – not the numbers – but giving police and fire the tools to do the job. That commitment is there. Also, the commitment to our young people through parks.

“The third thing is our responsive government,” James added. “Even just in terms of Cory’s responsive media outlet – it’s brought notoriety to Newark and highlighted Newark on its way back to greatness.”

Unlike Spencer and James and most of the rest of the area political establishment, state Sen. Ronald L. Rice (D-Newark) won’t be in the audience tonight, and he’s probably chief among Newark’s old school population whose teeth grate at the mention of Booker’s speechifying, not to mention his new media stylizing.

Arguably the mayor’s most unforgiving critic, Rice generally treats Booker’s elaborate and eloquent addresses as if they were segments in the ultimate bore snore. Convinced the mayor is little more than a Internet-hyped twitterer-in-chief, he intends to skip tonight’s event rather than settle in to one of the plush chairs in the packed auditorium to hear a dramatic reading of what he believes will be little better than an ethereal rant in iambic pentameter.

“I don’t need to go hear a poetic speech,” said Rice, a veteran of unsuccessful mayoral runs against both former Mayor Sharpe James (1998) and Booker (2006). “The state of the city’s  screwed up right now. I’ve got too much to do here before I go down there for that fiasco.”

Simultaneously, Booker’s stoutest backer in officialdom is West Ward Councilman Ronald C. Rice, the senator’s son and Booker contemporary, who given the chance makes the strongest case possible for Booker, who’s up against former Essex County Prosecutor Clifford Minor in his bid for re-election.

Pursuing the elder not the younger Rice’s view of Booker – if not as aggressively as the motor-mouthed veteran senator – Minor has repeatedly characterized his younger opponent in City Hall as a techno geek who doesn’t have a feel for the streets and is governing the city in absentia.

As for Booker’s egg-headed celebrity – way overblown, said the councilman.

“I know the mayor is not exactly renowned for showing up at the barbershop and hanging out, jawing around with the guys,” said Rice. “Fine. That’s just fine. I would rather have a mayor who’s out there shaking the trees for my city like this one is – getting us money to build Nat Turner Park, getting us grant money to increase our police force in an economic downturn and to install surveillance cameras – rather than a guy at the barber shop telling me we have no money. I would rather have a mayor landing a grant from the Gates Foundation for resources, money for crucial prisoner re-entry programs rather than a glad-hander showing up at a chicken dinner and telling me the city has no money.”

Stack-like with his cellphone, the councilman said some members of the older generation – his father’s generation – will never catch get wired with email let alone text messaging and twitter.

But, in his view, modern communication devices have turned him – and the mayor – into better and more keyed in elected officials.

“My dad, when he was a councilman, relied on letters and phone calls to deliver constituent services,” said Rice. “Now I take complaints off my website, BlackBerry, cellphone, three facebook pages, twitter, etc. People tweet me. Constituents. I do this 24-7. I don’t have another job, like my dad did. Because of the accessibility, I have three to five times the number of complaints than my dad had when he was the West Ward councilman.

“Everyone my age or younger has no problem with Cory tweeting,” added the councilman.

The relentless narrative out there that Booker has mostly shuttered Newark while hitting New York and L.A. high society doesn’t comport with reality, Rice insisted, even as his father groused, “Most of my constituents don’t tweek and do computers.”

“Look, this mayor’s been the only mayor who holds open office hours – who’s there for up to five hours sometimes,” shot back the youngr Rice. “Me, I hold block federation meetings at regular times. If you can’t find me via email or on the phone, you can reach me at those meetings. We can’t solve every problem, but we are making a strong attempt to be more accessible and transparent.”

Asked about measurable improvements made by the Booker administration over the course of the last four years, Councilman Rice said in spite of a long way to go, public safety has improved, as have recreation and youth programs.

The Boylan Street Recreation Center in the Rices’ West Ward was a disaster area prior to the New Wave Booker team securing resoration funds.

“And I would say one more thing – not to cast aspersions on the people before us, but frankly cleaning up the malfesance in city government has been a huge stride forward,” said the younger Rice. “Under this mayor, Newark – in terms of its services and offerings and communications – is a legitimate 21st Century City.”

Senator Rice said the mayor’s done little more than take hold of the ceremonial shears and cut the ribbons on projects launched and driven during the James years.

“Sharpe did the same thing when he took on projects launched during the Ken Gibson years, but the difference was Sharpe gave Gibson credit, and all Cory does is try to take all the credit,” Rice said.

A committed Minor backer, the senator said the laconic judge is a serious candidate who can beat Booker.

“I have people telling me they want him coming out and hitting hard, but let me tell you something, you don’t need $6 million to beat Booker, you need three or four thousand dollars, which I’m confident Minor can raise. When you get in the ring you have some guys who take their time and move around a little bit – that’s Clifford Minor.”

“If you listen to the administration, they’ll tell you crime is going down, but people don’t believe that,” Blount said.

On his way into the event, former Assemblyman Bill Payne, brother of U.S. Rep. Donald Payne (D-Newark), gave the most politic answer – his nephew’s on the Booker Team even if the elder Payne isn’t the most ardent supporter of the mayor’s.

“The current leadership is doing everything they know how to do, but we should not paint rosy pictures,” said the lifelong Newarker and family patriarch, mostly in a nod to the national economy.

Whatever the national imprint on the city or fineprint of tonight’s state of the city address, Booker, of course, is heavily favored to beat Minor. 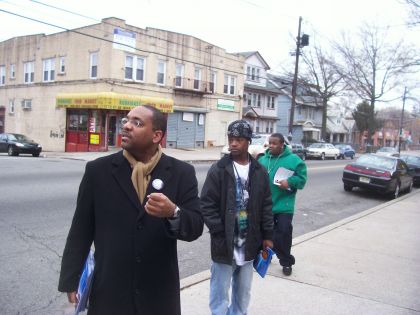