NEWARK – The political landscape in the North Ward is too devastated right now for war, insist sources whose propensity even for intrigue has been blunted by a state Attorney General’s Office investigation into absentee ballot fraud.

“I’m focused on my campaign; of course, there’s still time for people to pick up petitions, but there’s nothing happening so far,” said North Ward Councilman Anibal Ramos, a member of the Booker Team and ally of North Ward Democratic leader Steve Adubato.

But just because Ramos – like his ally in the West Ward, Councilman Ronald C. Rice – won’t receive a serious challenge in the North Ward, don’t expect exhaustion and natural conflation of political factions to eliminate every vestige of a contest up here, even though the action will engage the at-large candidates from the North Ward more than North Ward organization man Ramos.

Such competition could benefit a North Ward Democratic organization that ultimately has a longer-range objective as it struggles to regroup: citywide control and election of a mayor from within its own ranks four years from now, most conceivably Ramos, say sources.

In short, it’s not spent emotions alone that have Adubato’s people resigned to the old idea that there are hard races against opposition and soft races. In the former contests, if you see an opponent trying to get into a political event with a handful of campaign flyers, you make sure he doesn’t enter. In a softer atmosphere, you let him in and you let him work the room.

While none among the four at-large incumbents – Crump, Gonzalez, Quintana, and Payne, Jr. – will be targeted from within by Adubato’s people, one is arguably the most vulnerable in the face of the old school-connected James, generally viewed as the most dangerous at-large challenger.

Seldom afraid to run afoul of Adubato and the high vote-getter among at-large candidates in 2006, Quintana won’t have to worry about retribution for his 2007 challenge to the North Ward Democratic Organization, which pitted him against state Sen. M. Teresa Ruiz (D-Newark) in a losing effort. Vengeance in his case would amount to a wasteful expenditure of resources and less a strategic than emotional play, according to North Ward operatives.

At-Large Councilman Donald Payne, Jr., can also likely depend on North Ward organizational support. Anything less would create significant political unrest by turning his father, U.S. Rep. Donald Payne (D-Newark), decisively against Adubato and Booker – a civil war from hell scenario that Adubato won in 2007, but that Booker, left to his own devices against Payne in 2008, lost. The mayor doesn’t want the hassle of Payne lining up with his otherwise apparently traction-less challenger, former municipal Judge Minor, and Adubato has no reason right now to re-create turmoil with the Paynes.

Whatever her particular gifts and longevity of service, Council President Mildred Crump – right behind Quintana four years ago in citywide vote production – can claim immunity by virtue of being the only woman on the Booker Team. Few can run against her and look good.

Of the four incumbent at-large candidates, that potentially leaves Gonzalez – a Booker generated ally married to Booker’s Deputy Mayor Margarita Muniz from Perth Amboy, who received just slightly more votes than Payne in the last general election – as the most singular question mark on the North Ward tundra.

Sources say he would be the Booker Team stalwart most imperilled by At-Large challenger John Sharpe James, son of the former mayor, a near-South Ward winner four years ago, who this year already appears intent on running a strong campaign. An Afghanistan War veteran career soldier – and county employee of Executive (and Adubato ally) Joe DiVincenzo – who figures to grab some citywide Sharpe sentiment, James is a South Ward name candidate who could, moreover, prove a valuable Adubato ally in the future in that ward precisely juxtaposed to Adubato’s power base.

“You’re going to hear hundreds of stories,” said Ramos, unconvinced that idle street gossip about the campaigns will morph into anything significant.

“I think the at-large candidates are going to be fine, and I am supporting all of them: Mildred, Carlos, Luis and Donald,” added the councilman.

But it won’t be a question of Adubato and the North Ward organization or other Newark old-timers targeting Quintana, says one Newark source.

“People like John Sharpe James and have known him a long time,” said the source. “What will happen is he will show up at events and at fundraisers of Booker Team members, and no one is going to kick him out. Will he be allowed to speak? No. But he will be allowed to move around and talk and do his thing.”

It’s unusual, the source added, for two of the at-large council people to be Latinos in a city where their numbers hover in the 40% range and African Americans dominate, a situation that puts Quintana and Gonzalez potentially in striking range for a strong black candidate, and where Quintana’s more than two decades arguably put him in a stronger position than his fellow councilman.

Assessing the potential for municipal level fallout from that fracas three years ago, Quintana shrugs.

“I’m a big boy,” said the former deputy mayor under Sharpe James and an at-large councilman since 1994. “My thing all along has been the need for shared power. Steve Adubato wants all the power, but I want that power distributed. If Steve wants to help me get re-elected, I will welcome him. I hope he supports me.”

Quintana notes that he stood with Ramos early in 2006 when Ramos opposed and deposed sitting Councilman Hector Corchado.

Of course, a year later, waging an underdog campaign against Ruiz and Adubato, the consummate anti-establishment Quintana reveled in the role of Zapatista, teaming with the disgruntled, routed forces of former Assemblyman Wilfredo Caraballo and building as much guerilla support as he could find in the North Ward’s hinterlands on his way to getting drubbed, 3,525 to Ruiz’s 10,444 votes.

A former district leader and longtime party organizer, Ruiz bristled at the “political neophyte” charge, which both Quintana and fellow off-the-line challenger Bill Payne used repeatedly and dismissively, but otherwise both men never went truculent, and after the election, Ruiz had little trouble embracing both former foes.

Now, the state’s subsequent investigation into the way campaign workers collected absentee ballot signatures for Ruiz’s senate campaign – and the indictments of five North Ward political operatives, including Ruiz’s husband, Freeholder Samuel Gonzalez, put the hurt on a powerful organization in the immediate aftermath of its political heyday – a heyday spawning the election of Ramos, Ruiz and five sixths of Newark’s legislative representation, and increasing control of the city with Central Ward gains that continually forced Mayor Cory Booker to acknowledge Adubato’s political supremacy.

Given Adubato’s ability to exact what he wanted: the concentration of power in three of the city’s five wards – the North, East and Central – and enormously increasing Ramos’s chances of succeeding Booker as mayor, the calculation now of seeking revenge on Quintana makes little strategic sense, even in normal circumstances and absent the specter of investigations and indictments.

While going hard for a Booker-man like Gonzalez might lack a specific citywide payoff, helping a South Ward brand name now like James could arguably translate into bulked up political power for Adubato, Ramos and their allies, with the danger always present that he could get too strong – an outcome that Booker in particular as an Adubato ally of convenience will watch carefully.

The best outcome for Booker – eradication of James and a solid Gonzalez victory – is, of course, not necessarily the best outcome for a North Ward organization struggling to get past a foundation rattling AG investigation, and eager to replant and refocus on its longer term post-Booker political agenda.

Ultimately, James will have to do the work on his own. But whatever Booker’s strategy is to contain him, the at-large challenger will probably not encounter hard obstacles from Adubato and Newark’s older school company. On the ballot, the organization line will be closed, but along the way, those doors to the packed celebrations and fiestas, will open. 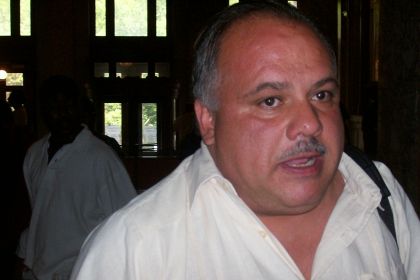