“Each committee person gets a single vote,” said Polos, his only assessment of the turf he hopes to win in his March 16th match-up with fellow Democratic Freeholder Mildred Scott.

Polos insists that his challenge of veteran Sheriff James Spicuzzo – which last week ostensibly forced Spicuzzo from pursuing a tenth term – has everything to do with the sheriff’s department and little or nothing to do with the party organization, which suffered a three point loss in last year’s governor’s race.

One of the headline headaches that finally triggered Polos to pick up the phone and call Spicuzzo to tell him he was running was the sexual harassment lawsuit against the department, a settlement that will cost Midddlesx County taxpayers $1 million.

Now, in addition to serving as sheriff, Spicuzzo is the party chairman – and up for re-election in June, a circumstance that has reform-minded Democrats eager to dislodge the wobbly political veteran.

But while ruling out no future plans and stopping short of affirming Spicuzzo’s re-election, Polos reiterated that his interest is not to build traction to helm the wounded county political operation. His endgame, he said, is sheriff.

“Our chairman intends to remain as our chairman,” Polos said. “He’s not up for re-election as chairman right now. The focus of this discussion is the sheriff’s department.”

Facing his March 16th showdown with Scott, Polos said he believes he can land the support of enough county committee people to win, despite the early impression that Scott will command the backing of some powerful county Democrats, including state Sen. Bob Smith (D-Piscataway) from her hometown, according to Middlesex sources.

As for the challenge of Democrats running countywide on terrain newly christened by Christie as GOP country, Polos said, “The Christie victory should be a wakeup call. Clearly, we need to do better at honing and delivering our message. Governor Corzine’s visibility and message within the county were not strong enough during the course of his term, a problem as people’s angst and concern about the economy were growing within Middlesex.”

Whoever wins the Scott versus Polos fracas will face Republican Keith Hackett, a former state police captain, in the November general election. 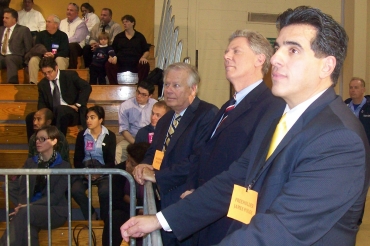