NEWARK – The mood in this old factory turned corner room campaign headquarters was blunted even in the usually festive Ironbound.

“I think the mayor said it all when he said that if this is true, the deputy mayor broke the level of trust he had,” Amador told PolitickerNJ.com. “Looking at the transcripts, all of this actually all began right after everybody was sworn-in.”

Now, U.S. Attorney Paul Fishman made clear that Booker helped the feds close the case against Salahuddin, and had absolutely nothing to do with the charges leveled – a point amplified today by Pablo Fonseca, campaign manager for the Booker Team.

Present among Amador’s campaign cadre at the East Ward kickoff event in a statement of campaign unity (given Fonseca’s friendly relations with Amador’s opponent, businessman Peter Pantoliano), Fonseca said he has not read the indictment against Salahuddin.

“I haven’t read it, eventually I will read it,” Fonseca told PolitickerNJ.com.

“It (the indictment) has nothing to do with the mayor – no association with the mayor,” added Booker’s former chief-of-staff, who left City Hall in 2008 to serve as the political director for Barack Obama’s New Jersey campaign.

“That’s what the article in the paper said,” he noted when asked how he could say the case wouldn’t impact the mayor’s campaign if he hadn’t read the indictment.

“Ron Salahuddin made a mistake,” Fonseca said. “A jury will decide his fate. Ron saved a lot of lives.”

Fonseca would not speculate about the identity of an unnamed high-level official at City Hall whose assistance Salahuddin said he required in order to secure demolition contracts for his business partner Sonnie Cooper, according to the feds.

In the indictment, Salahuddin at one point complains about the high-ranking official’s insistence on using in-house resources to complete demolition work in the vicinity of the New Jersey Devils stadium, as opposed to fast-tracking Cooper’s contract.

Speaking to his own departure from the head of the mayor’s inner governmental circle, the campaign manager said, “I left because I had the incredible privilege to be the political director for Barack Obama. Instead of going back to being inside City Hall, we decided that I would give my full attention to getting the mayor re-elected.”

After notable and sustained losses, Booker over the course of the past year secured substantial political victories by both insuring the support of North Ward Democratic leader Steve Adubato for him and his team, and bringing former Sharpe James ally Central Ward Councilman Charles Bell into the fold.

“The mayor was just at the Central Ward campaign headquarters for Charlie Bell where there were 100’s of people present in support of the Booker Team,” Fonseca said as Booker headed through the big crowd here in the East Ward after vociferously endorsing Amador.

A cemented peace with Amador after troubled 2008 relations between the veteran councilman and the mayor’s office came as yet another signal of Booker Team strength – and heartbreak to Pantoliano, who had hoped Fonseca would prevail on Booker to dump Amador from the ticket in favor of himself.

The most popular elected official ever to come of the Portuguese community in the Ironbound, Sheriff Armando Fontoura shook his head ruefully when asked about Booker’s former mayor of public safety.

“I’m very disappointed,” Fontoura said. “He worked for me for six years before Joe DiVincenzo came over and stole him from me. He was one of the best workers we ever had. His productivity was very high. He was one of our best detectives. How he would wind up in that kind of situation, I don’t know.”

An opponent of Councilman Luis Quintana in the at-large council race, John Sharpe James, on Thursday night told PolitickerNJ.com that despite Booker’s innocence, the Salahuddin case goes to the heart of the Booker Team’s crime fighting credibility, pointing out that Salahudddin in the indictment was allegedly eyeballing illegal contracts as far back as 2006 while officially charged with beefing up public safety.

“I can hire you, but I can’t control what you do,” said Quintana, himself a former deputy mayor under James’s father, former Mayor Sharpe James, who’s now an ally of Booker’s.

“What I think is very simple,” Quintana added. “I can hire you, then you can go and get drunk at a bar. Am I responsible? No. We can’t control what people do. We have to live by the rules. Could we do better? Sure. We have to have more ethics, more workshops. The mayor has only good intentions.” 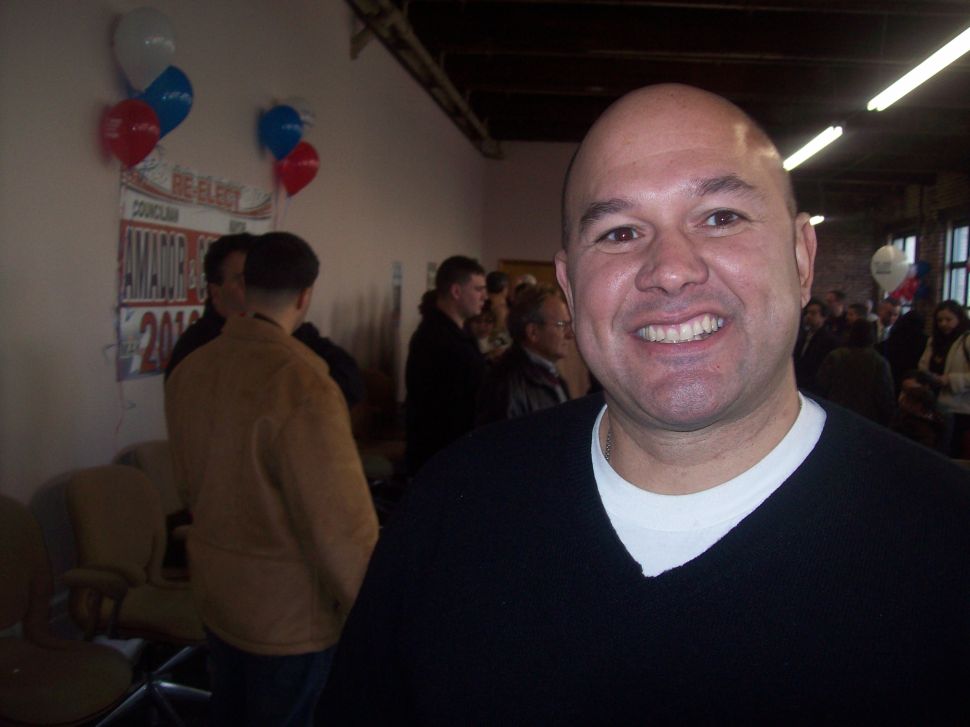