Middlesex County Freeholder Mildred Scott today told PolitickerNJ.com that she intends to get in the race for sheriff.

“Yes, I am,” Scott said, when asked in a brief interview if she’s running.

Her decision to pursue the Democratic nomination to run for sheriff comes a day after Sheriff Joe Spicuzzo announced his decision not to seek a tenth term. Scott’s decision to run would create a March 16th convention battle between herself and Freeholder Jim Polos, a fellow Democrat who yesterday told PolitickerNJ.com that he’s in to win.

“It would be a great honor and privilege to serve the people of our county as sheriff,” she said. “My 27 years’ experience as a sheriff officr, my several leadership roles in that department and my services as chairman of the freeholder law and public safety committee which oversees all law enforcement agencies of the county have helped to prepare me for these responsibilities.”

Scott expects to get the backing of the man she hopes to succceed.

“I have great respect for Sheriff Joe Spicuzzo who has announced his decision to retire at the end of this year after nearly 30 years of service,” said the Piscataway resident. “He strengthened the department in countless ways with his service. However, I understand and respect his decision to retire.” 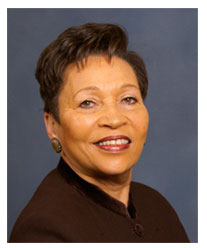