Bayonne Mayor Mark Smith officially declared himself a candidate for re-election this evening at a fundraiser at the Chandelier.

His political enemies grunted the idea out there this week that maybe Smith wouldn’t pick up petitons, but they were there for him at the event tonight.

“I believe in building on what we have accomplished these last 18 months and the only way to do that is to continue this journey together,” Smith told a crowd of about 400 people. “The best is yet to come.”

Among those candidates running against him in the May nonpartisan election is Assemblyman Tony Chiappone (D-Bayonne), who’s battling state charges that he funneled state paychecks to aides into his own campaign account. 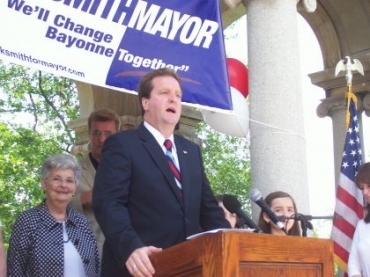