Scuffed up in 2009 in a gubernatorial election that saw Republican Chris Christie beat Democrat Jon Corzine by three points in what was considered a solid Democratic Party county, dragged through excruciating senate scrutiny and thumbs-down input from Christie on his way to eventually being confirmed as commisisoner of the Sports and Exposition Authority, and battling his own health issues, Middlesex County Sheriff Joseph C. Spicuzzo of Helmetta announced today he will not seek re-election as sheriff this year.

A former mayor of Spotswood and chairman of the Middlesex County Democratic Organization for almost 16 years, Spicuzzo has served as sheriff for almost 30 years, and plans to serve out the remainder of his current term through the end of this calendar year. His decision not to run for a tenth term reversed his announcement from a month ago that he was running for re-election.

Lauded by new State Party Chairman John Wisniewski for his “dynamic” political leadership, and described as “cuddly” by Corzine on the campaign trail, the party chairman plans to seek re-election as Party Chairman in June.

In a release isssued this morning after he spoke with county party leaders on Tuesday, the veteran sheriff cited health concerns as the reason for his decision to refrain from running again as sheriff.

“I made the decision to retire now before health issues could adversely impact the performance of my duties as Sheriff,” he said.  “I am making the decision public now because the Democratic Party has scheduled its nominating convention for March 16.”

Spicuzzo said the Party’s candidates for sheriff, county clerk and three freeholder seats will be selected at the convention, and did not immediately issue an endorsement for his replacement.

“My duties as Sheriff have been one of the highlights of my life,” Spicuzzo said. “I believe the many innovations that originated with me have strengthened my office. I am very proud of my service.”

The Republicans appear to be mobilizing behind retired State Police Captain Keith Hackett as their candidate for sheriff.

Spicuzzo’s tough 2009 finale received another negative jolt last week when the Star-Ledger reported that Middlesex County agreed to a nearly “$1 million settlement to end a sexual harassment lawsuit filed by five female sheriff’s officers against the county and sheriff’s department in 2004.” 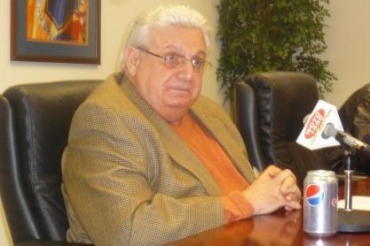