“The dead of winter is no time to leave New Jersey’s unemployed out in the cold,” said Sweeney in a written statement. “This is not a plan to trim costs, it is a hit on families who right now depend on their unemployment checks to make ends meet. This is money that pays the monthly heating bill, puts food on the table or gets the gas in the car to go job-hunting. This idea is a total nonstarter that will not even find its way through the Senate doors.”

The Star-Ledger detailed some aspects of the proposal on its Web site last night.  Christie wants to institute a week long waiting period to receive benefits, while reducing the maximum weekly benefit from $600 to $550.

Sweeney said he would seek federal assistance for the unemployment fund, and that he would be willing to sit down with Christie to figure out other options.  He was also skeptical about a companion plan to institute a phased-in unemployment tax increase.

“While I understand the concerns of business, we cannot paper over the fact that this increase is inescapable,” he said. “Whether the pain is felt immediately or takes two years – the fund still must be able to meet the needs of the unemployed. Keeping money from going into the trust fund is every bit as wrong as raiding it.” 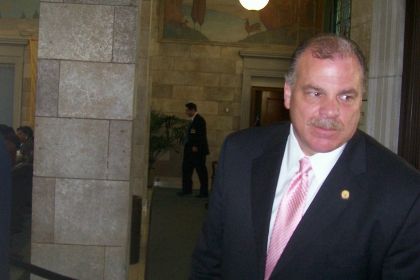