It wasn’t the only gaffe on this snow day, which Christie used to deliver a saber tooth budget speech to senators and assembly people, but didn’t provide the fineprint to the liking of state Sen. Jim Whelan (D-Atlantic City) and other Democrats now in the position of being able to criticize a sitting governor from the other party for the first time in a decade.

“You’re supposed to get the supporting documents in a timely fashion,” griped Whelan. “The details weren’t available so it’s tough to comment. I’m sure it’s just an oversight, and they will get the glitches out. If it becomes a pattern, then that’s a problem.”

Whelan said he was concerned about Christie’s decision to cut $475 million in aid to education as a way of closing a $2.5 billion state budget gap.

“I think given the crisis everything has to be on the table,” Whelan said. “But I don’t have the details right now to respond responsibly.”

If Christie intends to scrap the so-called millionaire’s tax while cutting programs for the most vulnerable – that could be a problem, he added.

In justifying his proposed cut to education aid, Christie in his speech said, “Our solution does not take one penny from the instructional classroom. Not one teacher will be laid off.” 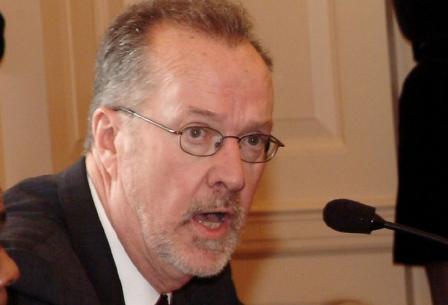