Immediately after taking off his hat as chairman of the Assemblyman Transportation Committee, where in a hearing this morning he criticized the cuts in state subsidies to NJ Transit and a proposed fare hike, he put on his hat as Democratic state chairman.

Wisniewski called a presser ostensibly to champion the one-year anniversary  of the Federal Economic Stimulus plan (which was yesterday).  But his main point was that Republican Gov. Christopher Christie’s executive order to freeze almost $475 million in education aid essentially blunts aid to the state’s school districts that came from the stimulus bill.

Wisniewski distributed a side-by-side comparison of the $530 million school districts had derived from the stimulus versus the $474 million they would have to spend from their surpluses.

“While this stimulus money helped property tax payers by funding educational construction, the fact of the mater is now they’re going to get hit on the other side by taking money out of their surplus accounts that by law they’re going to have to have next year,” he said.

Wisniewski acknowledged that he was talking about “different pots of money.”

“But the federal government giveth with one hand and the state administration under Christie taketh with the other hand,” he said.

A spokesman for Christie said that Wisniewski’s complaint was short-sighted.

“That was a one-shot use of federal money that delayed the pain, kicked the can further down the road, which is why we are in the fiscal mess which we — and the Legislature — must fix.  It does not change the obligation that this Administration has to balance a current year budget with a $2.2 billion deficit,” said Christie Press Secretary Michael Drewniak.  “If Assemblyman Wisniewski has some constructive, realistic ideas and not merely complaints, we’d love to hear them. We’re wondering why the Legislature during the lame duck session didn’t try to balance the budget.  We are not running from theproblem, we are fixing it.” 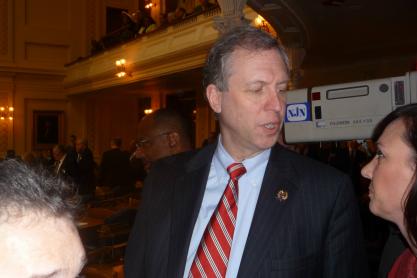