Something to keep on the radar screen: Gov. Christopher Christie has not yet announced whether he will renominate New Jersey Supreme Court Associate Justice John Wallace, whose current term expires on May 20.  Wallace is the only African American on the state’s top court, and one of two Justices from South Jersey.  If Christie decides to retain Wallace, the Justice would serve until March 13, 2012, when he reaches the mandatory retirement age of 70. Some judiciary watchers think Wallace would leave next summer, so that a new Justice could be in place in time for the start of the court’s 2011-12 session in the fall.

If Christie keeps Wallace, he would maintain the 4-3 Democratic majority on the New Jersey Supreme Court.

During the campaign, Christie refused to comment on his intentions toward individual Justices, and would not say if he would have reappointed Justice Barry Albin, who was confirmed by the Senate for a tenured term last year.  But he did say he would no reappoint Justices who legislate from the bench.  The new governor left himself plenty of wiggle room to go either way on Wallace.  No sitting Justice has ever been denied reappointment, although Chief Justice Robert Wilentz struggled to win Senate confirmation.

The Christie administration includes a huge number of former federal prosecutors, some of whom are obvious choices for a spot on the Supreme Court short list.  But Christie would be unlikely to pull name someone out of his staff or cabinet in May, after just four months on the job.  That might be advantageous to Wallace.

Christie will have to decide next year if he wants to keep embattled Justice Roberto Rivera-Soto, whose personal ethics issues have haunted much of his tenure on the bench.  Rivera-Soto is the lone Latino on the Supreme Court, and the second South Jersey member of the seven Justices.

Justice Virginia Long will reach the mandatory retirement age of 70 in 2012, and Justice Helen Hoens’ term expires in 2013. 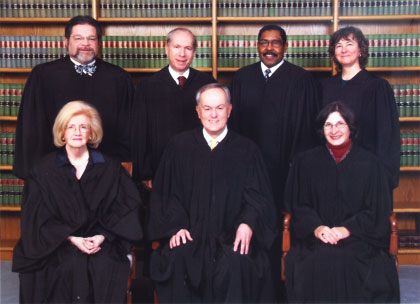