With the retirement at the end of this year of 40-year incumbent Mayor Glenn Sisco, Councilman Bob Collins today formally announced his candidacy for mayor.

Eight years as the governing body’s budget chairman, Collins is running with the endorsement of the 81-year old Sisco as he seeks his party’s backing in the June 11th Republican Primary.

“I think these times demand proven leadership and I have a vision of smaller and more efficient government,” said the 55-year old Collins, a 25-year veteran of the banking industry and former bank president at two institutions, who now serves as chief financial officer of a non profit.

Collins has served on the council for nine years.

It’s overwhelmingly Republican Party politics in Kinnelon, so if there is a contested primary, that’s where the main drama will lie.

Councilman Dan O’Dougherty, who four years ago challenged Sisco and lost, has not yet publicly declared his candidacy. 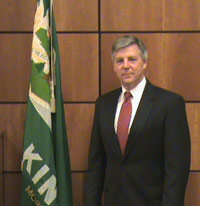