Union County Democratic Committee Chair Charlotte DeFilippo and Assemblyman Jerry Green Green (D-Plainfield) this morning told Freeholder Rayland Van Blake of Plainfield that he wouldn’t be getting the party line to run for a second term.

“As far as I can tell, they’re looking to basically flip years in the upcoming election as far as the freeholder seat is concerned, between Linden and Plainfield, and I get bumped out because of that,” said Van Blake, a former Plainfield City councilman and television actor who won off the line in 2007 as a member of the New Democrats.

“The assemblyman and the county chairman told me flat out that’s what it was,” Van Blake added.

There’s a mayor’s race in Linden this year, and Democrats want a freeholder candidate to help create line strength on the ballot in their bid to upend independent Mayor Richard Gerbounka.

Council President Robert Bunk, the Democratic Party candidate for mayor, has trouble on the ground in Linden owing to the anti-organization mayoral candidacy of Councilman Derek Armstead.

Van Blake says the party’s dumping him to run a Linden-based freeholder candidate.

“It would appear that way,” he say, when asked if he believes the reasoning is to stregthen Bunk’s bid against Gerbounka.

But that wasn’t part of the meeting the freeholder had today.

On his way in to a meeting with Green, Van Blake would not immediately comment on his next move until after he speaks with the veteran assemblyman. 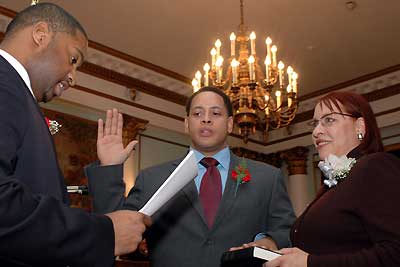