On the ideological spectrum, it’s hard to get closer to the Tea Party movement than state Sen. Michael Doherty (R-Washington Twp.), a Republican who has taken stances that would put him squarely in the conservative camp anywhere in the country, let alone New Jersey.

But Doherty, who as an assemblyman was the highest ranking New Jersey elected official to support U.S. Rep. Ron Paul’s (R-Tex.) 2008 presidential bid, is not ready to throw his arms around the Tea Party movement just yet.

Doherty said that those pitfalls are apparent in the three unsuccessful primary challengers to Ron Paul, who is often credited with inspiring the movement.

“I don’t believe you can find an individual who more respects the constitution,” said Doherty.  “It really raises questions in my mind what the Tea Party movement is about, who the leaders are and what their agenda is.”

A Rutgers-Eagleton poll released earlier this week found that 75% of Republicans who have a favorable view of the Tea Party movement view President Obama as a socialist, while half – 49% — consider his administration “un-American.”

The pollster read respondents a number of statements and asked if they agreed or disagreed.  Two of the questions were “President Obama is a socialist” and “The Obama Administration is un-American.”

Doherty does not use that kind of language, and thinks that it oversimplifies the feelings most Tea Party activists have about the Democratic administration.

“I don’t believe [Obama] adheres to what our founding fathers envisioned for our country,” said Doherty, who said he supports limited government compared to Obama, who he said is “in love with bigger government.”

“Certainly that’s not a traditional view of what America should be all about. Perhaps that’s what Tea Party people were saying given a poor choice on the survey,” he said. “These survey questions tend to drive you into hard camps.”

A different poll released this week, from Fairleigh Dickinson University, pitted Doherty against U.S. Sen. Bob Menendez (D-Hoboken) in a hypothetical 2012 match-up.  Doherty, who explored a 2008 U.S. senate run but has little name recognition outside of his legislative district, trailed Menendez 40% to 27%.  State Senate Minority Leader Thomas Kean, Jr. (R-Westfield), who ran against Menendez in 2006, led the state’s junior senator by a statistically insignificant one point – 40% to 39%.

With almost three years to go before Election Day 2012, Doherty said it was far too early to talk about his senate prospects. But, he said, “it looks like Menendez is pretty weak, and I think there are a whole handful of Republicans who can take him out in 2012, including Tom Kean.”

Doherty has had a good relationship with Kean since entering the senate, and said it was too early to say whether he would defer to Kean if he wants to run.

“I think Tom would make a great U.S. Senator. I have issues as well that I’d like to see discussed, and Tom and I share a lot of common ground,” he said. “I’m thrilled to be representing part of my state in the state senate…2012 is a long way away.” 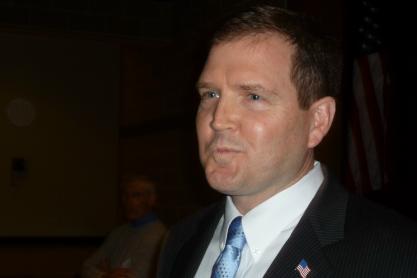