After suffering a loss before the GOP screening committee in his home county last night to Princeton venture capitalist Scott Sippelle – his fourth and final loss in a bid to win county line backing – Fair Haven Mayor Mike Halfacre today announced that he has ended his run for Congress in the 12th District.

“In light of the results of the last several weeks, I will be suspending my campaign operations as of today and will no longer seek the Republican nomination for Congress from the 12th District of New Jersey,” Halfacre said. “I spoke with Scott Sipprelle a short time ago, wished him luck, and offered my help in any way possible to achieve our mutual goal: removing America’s most liberal Congressman, Rush Holt, from office.

“This is a difficult decision, mostly because of the responsibility I feel toward the many, many people who have supported me over the last year. I would like to publicly thank all of those people for their passion, determination, loyalty and selflessness.”

Sipprelle in a statement thanked Halfacre for withdrawing, thanked him for his support, and worked in a chop to the knees of Speaker Nancy Pelosi (D-San Francisco).

“I am very grateful for this act of leadership and unity on behalf of our party,” Sipprelle said. “Mike is an accomplished Mayor and tireless campaigner, and I am a better candidate for having faced him in this primary.  I mentioned to Mike that in my business career, some of my fiercest competitors had often turned into friends and partners.  I expect the same will happen here.

“At the end of the day, Mike and I share common goals for America and I look forward to his support on the campaign trail as we work toward unseating America’s most liberal Congressman and ending Nancy Pelosi’s reign as Speaker of the House.”

This had been no affable rivalry.

Halfacre announced his Republican challenge of U.S. Rep. Rush Holt (D-Hopewell Twp.) in July of 2009, months ahead of Sipprelle, who entered the Republican Primary in January of this year.

As the only Republican in the 12th District Primary at the height of summertime Tea Party backlash against Holt’s support for the public healthcare option, Halfacre in opposing healthcare reform amplified his earlier criticisms of Holt’s aye vote on cap and trade and positioned himself as a conservative Republican opponent capable of harnessing Tea Party grassroots anger.

He went to at least two of Holt’s town hall meetings, installed himself at a separate podium and spoke out against healthcare reform as championed by the Democratic congressman.
But fundraising proved difficult.

He told PolitickerNJ.com at the outset that he would need between $500,000 and $1 million to run an effective campaign against Holt, but even as he established an eyeball to eyeball presence in Middlesex, the fundraising environment dogged him.

Then Sipprelle entered the race.

Halfacre’s campaign struck an early and aggressive contrast with the self-financing Wall Streeter from Princeton.

They figured Sipprelle’s past donations to Democrats would be his political doom in a Republican Primary, even as their new rival’s entrance produced a simultaneous shudder when several coveted public officials either flipped from Halfacre to Sipprelle – or remained painfully neutral.

The mayor knew Sipprelle would win the GOP line in his home county of Mercer, and didn’t believe Somerset could give the neophyte Princetonian the traction he would need to fight for those final two counties representing 66% of the GOP vote in the 12th District.

Halfacre prepared to make his stand in Middlesex.

If he could win there, he could halt whatever momentum Sipprelle built coming out of Mercer and Somerset.

The intensification of Middlesex meant the campaign grew more bitter, as Halfacre savaged Sipprele on his past life as a Democratic Party booster and Sipprelle jeered at Halfacre’s condemnation of the federal stimulus package while accepting the same federal funds for local projects.

Sipprelle was laying on a heavy barrage of big, glossy mail pieces, in additon to working the phones and the ground. The newcomer’s zest for campaigning impressed even some of Halfacre’s people, who tried in the trenches to spin the effort as minor league strong-arming.

The nascent Middlesex County Party chairman said he would stay out of the fray – then backed Sipprelle. The declaration sent wobbly noncommitals and even some early Halfacre hearties into the Sipprelle camp. Gov. Chris Christie’s win last year in Middlesex gave Republicans here a glimpse of what it looks like on the outside of perpetual agony, and with Thompson emergent as the new leader, some late in the game Sipprelle backers decided the party needed to get serious.

If it was to be a real party organization and Thompson was the man, Sipprelle was going to be the candidate.

Halfacre proved there was an organizational rift internally while registering a burst of life when he won the Middlesex GOP screening, but between then (March 11) and this past Saturday, Sipprelle and Thompson – now committed with his leadership on the line – went into overdrive.

The final vote tally at a packed convention at the Middlesex County Vocational School was 220 to 134 for Sipprelle in a victory that reflected big town turnout for the venture capitalist.

Halfacre projected soldierly resolve, but the shock factor was unavoidable.

It was no overstatement to say his campaign strategy hinged on Midldesex.

If he could hold there, then Monmouth, his home county of Monmouth would surely…

But now he had lost Middlesex.

At last night’s closed GOP screening at the American Hotel in Freehold with some party elders surfacing out of nowhere to suddenly belly up to the bar, the Halfacre forces – now far from the vanguard of the anti-establishment Tea Party movement last summer – knew they were up against that 0-3 record in the ultimate establishment arena.

“Primaries are divisive by their nature, but as long as they are not destructive I believe they make the victorious candidate stronger,” Halfacre said today. “I know I will be a better candidate in the future for having gone through this, and I know Scott Sipprelle is a stronger candidate today then the day he got into the race.

“I believe that in a primary, you give it your best effort and you shake hands like gentlemen at the end, win or lose. Because I believe that, I am asking my supporters to do what I am going to do: give their full support to Scott Sipprelle in his effort to defeat Rush Holt. The faster we unite in this worthy effort, the stronger we will become, and the better chance we will have to send Rush Holt packing.”

That will be no easy feat for Sipprelle, in a district where registered Democrats outnumber Republicans, 137,592 to 77,648.

“At the end of the day, in a year which should favor Republicans, it’s going to be hard to knock off Rush Holt, but you want to make it uncomfortable for him,” said Patrick Murray, professor of political science at Monmouth University. “It’s the same thing in the 6th District, where the preferred candidate (millionaire Diane Gooch of Rumson, who won Middlesex and Monmouth GOP backing against Highlands Mayor Anna Little) was the candidate with his/her own money to spend.” 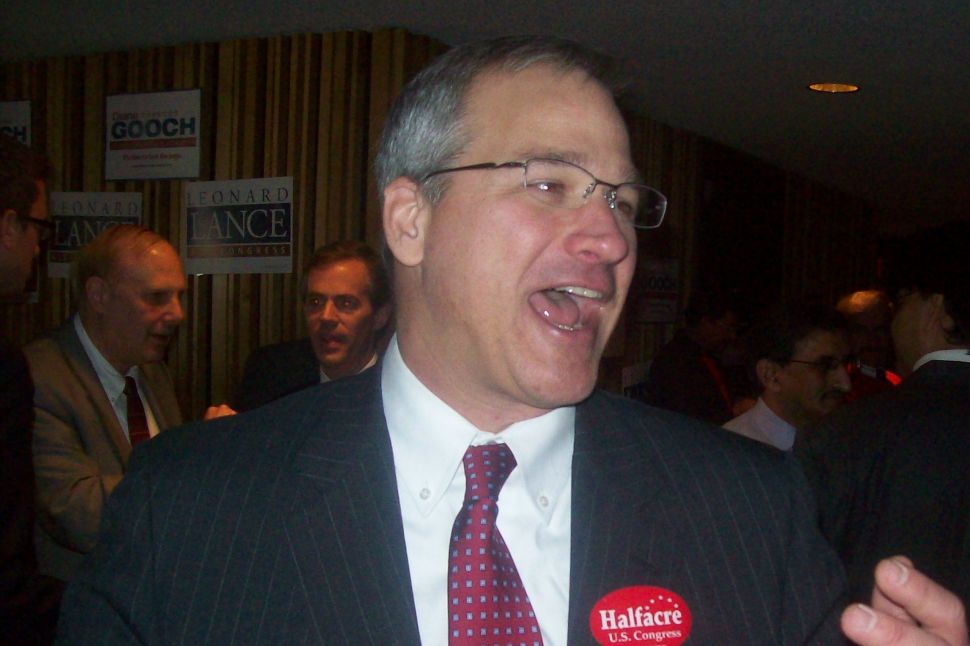