TRENTON – The worry existed at the outset when Assemblywoman Sheila Oliver (D-East Orange) ascended suddenly to the speaker’s chair accompanied by a steady diet of superlatives churned out by Essex County Executive Joe DiVincenzo.

No disrespect to Oliver, ran the in-caucus back-chatter, but she’s been in the assembly all of six years and if not straight out of the Sunday morning club, comes at least complete with county payroll stub.

People started laying bets on the time it would take for that blistering phone call to come through from DiVincenzo, who has a close relationship not only with Senate President Steve Sweeney (D-West Deptford) but with Gov. Chris Christie.

It came last week when the powerful county executive learned caucus members were peeling away from one of the public pension reform bills championed by Sweeney.

Intent on maintaining credible relations with Christie and Sweeney and facilitating their aims when consistent with his own, DiVincenzo not only dialed up Oliver – a co-sponsor of the bills – but other members of the Essex delegation with a simple message: don’t stop to amend, pass the bill.

Pass all of the bills. Added up they require public sector employees to contribute at least 1.5 percent of their salaries toward health care costs, cap unused sick and vacation time, and bar part-timers from enrolling in the state pension system.

Taking over a $20 million hit in Christie’s budget – $18 or $19 million of it designated for jails – DiVincenzo couldn’t afford a break down now with a deal Sweeney and Christie both wanted just as he was looking for ways to get that county allocation – or something close to it, at least – back by the end of the budget season.
He told Oliver to get it done.

So when Oliver went in to her caucus Monday and told her people the bills would pass without amendments, people went ballistic.

Republicans were in the shiny hallways rocking on their heels with laughter.

There were essentially three camps in that opposing majority caucus: those close to public unions like Assemblywoman Joan Voss, who weren’t going to buckle and vote for any of the bills, no matter what; those stiff with resolve in their loyalty to the South Jersey Democratic Organization and Sweeney – who knew the stakes for Sweeney and believed, because they had worked the bills for four year; and those who supported the bills – only with the amendments.

As a New Jersey Devils mascot waltzed beneath the agitated eyes of public sector workers impatient in the gallery, intransigence threatened to derail S-2, which not only would undercut Sweeney with private sector unions but undercut him with the governor, who, of course, would like to see these union reforms and then some.

And who was in his office.

An operative in the area that night said, “Christie and Sweeney – but mostly Sweeney, saw this as a chance to say ‘f**k you to the public employees unions, I’m in charge.'”

Caught between the imposing figures of the governor and senate president on one side; and teachers, cops, firefighters and communications workers on the other, 15 legislators behind closed doors stuck by the public sector employees and threatened mutiny.

“Careful,” ran whispers through the caucus. “Get it done for Shelia. First African American woman to serve… remember, her relationship with Joe D. …”

No, it was too much to ask. There were constituents out there in the gallery. The assembly people dug in.

“I’m worried about what this would do to the whole process of collective bargaining,” said Assemblywoman Linda Greenstein (D-Plainsboro), dead against the bill until the final vote.

“My district contains a large number of public sector employees, I can’t back this,” agreed Assemblyman Wayne DeAngelo (D-Hamilton), who would also vote “no.”

With DiVincenzo apoplectic in Essex County, eclipsed only by Sweeney’s fury on the other side of the Statehouse, Oliver told her caucus she would see what she could do.

She and Assembly Majority Leader Joe Cryan (D-Union) went down to the governor’s office.

He still gave Christie’s inner circle the creeps. This was the guy who during the campaign season last year was Gov. Jon Corzine’s attack dog. Every time they turned around, Cryan was bearing his teeth. Now he was showing up to negotiate. It was too much.

Plus, and this is the cynical interpretation, dividing Cryan from Oliver and making it appear as though the caucus is a two-headed hydra at the top, has its political advantages.

Christie’s people ejected him from the area.

Cryan went back to the caucus, steamed.

The severing of one Democratic leader from the other – the supposed independent Cryan who made the GOP howl removed from negotiations – crept into the worst feelings of paranoia among Democrats.

The phone calls. The yanked amendments on the day of the session.

Was Oliver was in there alone to do DiVincenzo’s bidding?

“No,” Greenstein said later. “I only had the sense my leadership was doing the best they could.”

In the governor’s office, the Speaker of the Assembly explained the situation to the Governor and Lieutenant Governor.

The caucus fully supports what S-2 tries to do. What they don’t support is the way it’s being done. The ramrodding. She reminded him of the four or five amendments the legislature wanted out of the bill, which they thought would come out of the bill last week, but which Sweeney-DiVincenzo pressure retained.

Particularly galling to their ranks was the elimination of the non-forfeitable right in S-2, a negotiated safeguard against executive or legislative reduction of benefits for new employees, and the inclusion of a market-based opt-out-of state-benefits provision.

Bob Master of the Communications Workers of America in the hallway, meanwhile, wore a bill-sinking grin.

Whether it got back to Christie or not, it stuck in the craw of the GOP when the union leader said, “Tell the governor to have a nice day.”

Now Christie’s ego was on the line.

Democrats were going to derail S-2. People remember Jon Corzine coming up against situations like this and reaching for his briefcase, evening over.

Christie made it clear to Oliver that the bill was going to move that night.

All the pension reform bills would move.

Then he told the speaker that if she walked out of the room and back to her caucus with no concessions, Joe Cryan would be the speaker.

“Let’s not leave this room until you get this done,” said the governor.

Oliver returned to the caucus with the opt out provision removed from the bill.

Having sought the stronger amendments Sweeney blocked, and tossed out of Christie’s vicinity in the process, Cryan bristled at the Sweeney-Christie alliance.

And some Democrats who walked back into a mostly empty Assembly chamber at that point, didn’t like feeling like lower order beings under a three-pronged power structure and that sense produced the beginnings of a minor, minor victory for Oliver, who briefly stopped the machine and argued the will of her colleagues.

Grudgingly voting in favor of the revised bill, Veteran Assemblyman Tom Giblin (D-Montclair), gave his district mate credit for attempting to carry the will of the caucus and for securing at least one amendment.

“Sheila listened to the caucus,” Giblin said. “People were pretty adamant about keeping opt out of the bill. She said she’d take it back to Chris Christie and Sweeney and met a lot of resistance. The fact is, she did get the opt out.”

Another Democrat, jaded, watching the crowd move out of the chamber and head for the exits as Oliver dropped the gavel, “If this is the way it plays out, it’s going to be a really nasty and dirty June.” 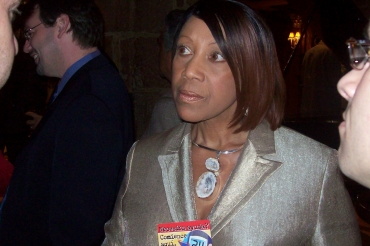