NEWARK – The abandoned Subway storefront sits at the edge of the Central Ward on the western border.

“Within striking distance of all five wards,” says John Sharpe James, candidate for an at-large seat and son of former Mayor Sharpe James, whose face is among those in the bay window.

“I don’t need a microphone,” he says.

A member of Clifford Minor’s Newark’s Choice team running in opposition to Mayor Cory Booker and the sitting Newark City Council, James immediately goes after the mayor in his Saturday afternoon remarks.

“We are not rock stars,” he says. “We are Newarkers. We stayed, we stayed, and we always survived. And we’ll keep surviving. Mr. Booker – I’m going to call him an alien – he needs to go back on his spaceship, wherever he came from. He doesn’t know how to interact with us.”

Booker’s little more than a diehard interloper, in James’s view.

“My mother and father are still married,” he says. “One thing about my father – he loved Newark and he still loves Newark. (In a prison cell doing time for corruption), “he probably knows what’s going on here as much as anyone. …He ran one of the best administration’s this city’s ever seen.

“The other side – they’ve got Oprah, they’ve got Bloomberg, but they haven’t serving the city.”

A retired Army officer who received the Purple Heart for wounds sustained in the war in Afghanistan, James says he doesn’t like going on vacation. He feels homesick for Newark after two or three days.

James opens his campaign headquarters a few hours after Booker joined South Ward Councilman Oscar James II (no relation to John or Sharpe James) at the Greater Abyssinian Baptist Church for the councilman’s kickoff. As members of the opposition tack up ward maps on the back wall of what will be the war room here at John Sharpe James’s headquarters, they talk confidently about taking down Booker: taking his money and taking him down.

James is guarded with the press.

“When the federal charges came down against my father, there was a media feeding frenzy – and there was nothing I could do about it,” he says.

He was in the military at the time.

Now a “Brick City” television crew maneuvers in the campaign headquarters, and while James is willing to do interviews, his top of the ticket running mate, Minor, stays in his car until he’s sure they’re gone. 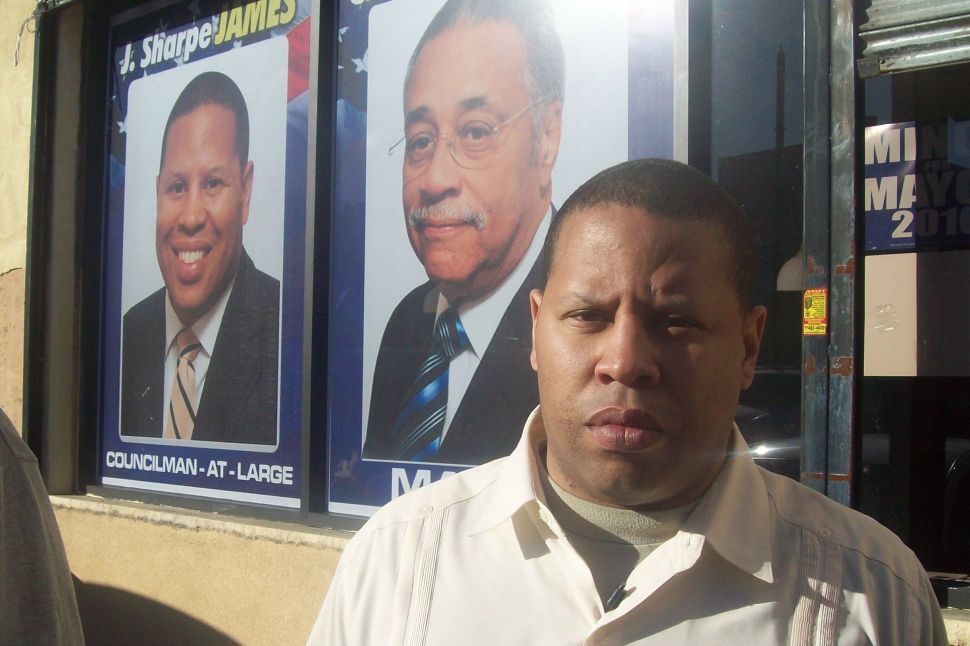