Developer Michael Kasparian plans to seek a new term as Bergen County Democratic chairman, and it remains to be seen whether he will run unopposed.

“I will be running for the chair this June, and no one has informed me of any intention to challenge my candidacy,” Kasparian told PolitickerNJ.com.  He preferred not to go into any further detail.

But while Ferriero wanted Kasparian to be his replacement, the new chairman has taken pains to highlight his own less autocratic leadership style.  Most Bergen Democrats acknowledge that he is anything but autocratic, even the anti-Ferriero.  But it has come at a price.

“We complained that we had a machine when we were winning, and now we’ve lost that machine and we’re losing,” explained one Democratic elected official with ambivalent feelings about Kasparian who did not want to be identified.

Both privately and publicly, prominent Bergen Democrats have complained that Kasparian is indecisive, that the strong leadership they’re used to is lacking.

Although there had long been public infighting in the Bergen County Democratic Organization between Ferriero loyalists and a faction of reform advocates led by state Sen. Loretta Weinberg (D-Teaneck), elections were tackled with coolness and efficiency.  The public infighting was, for the most part, relegated to the Bergen County Republican Organization.

Now, the roles are reversed.  Top Democrats like state Sen. Paul Sarlo – in addition to Weinberg and her running mate, Assemblyman Gordon Johnson (D-Englewood) – have been openly critical of the way Kasparian handled the party’s freeholder recruitment.  Republicans, meanwhile, still have a party full of tension, but recently have kept the griping off the record, if barely beneath the surface.

Some of the most important people who will decide Kasparian’s fate are local municipal chairs – many of whom were loyal to Ferriero and have jobs with the county that they’ll almost certainly be forced to leave if a Republican administration takes over.  For them, it’s not just County Executive Dennis McNerney’s job at stake.

Hackensack Municipal Chairwoman Lynn Hurwitz, for instance, is McNerney’s deputy chief of staff and has sway over Hackensack’s committee votes.  She declined to comment on Kasparian.

But while there is clearly some disenchantment in the party ranks with Kasparian, detractors have not rallied around a candidate to replace him.

Sarlo, for his part, demurred when asked whether he would support Kasparian for reelection.

“At the end of the day, we’re going to make sure the party is united regardless of who the next chairman is going to be,” he said.  “We’ll have to see if any other candidates emerge, and at this point he is the only candidate.”

Weinberg, whose recent alliance with Sarlo to support Westwood Mayor John Birkner made for a strange combination, was also quiet on Kasparian’s future. 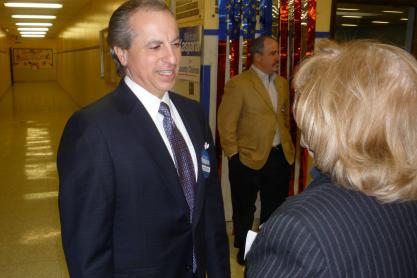