The harder the teachers’ union works against his re-election, the more Gerald McCann’s re-election to the Jersey City School Board looks like a walk, argues the city’s former mayor, who in his battle with the teachers locally has ironically become Gov. Chris Christie’s highest profile school board totem ally.

In a ground level replication of Christie’s Statehouse calls for teacher salary givebacks, the big city Democrat who once said Michael Chertoff would be better suited behind the wheel of a garbage truck than at the helm of the U.S. Attorney’s Office, helped derail a budget containing teacher raises of 4.35 and 4.7 percent.

“If they forego the raises, 373 people would still be employed and we wouldn’t have a $10 million tax increase,” McCann told PolitickerNJ.com. “We could still give them a raise and keep 300 people employed – a slight raise some. The other 70 or so are retiring or leaving through attrition.”

McCann, who wrote a letter of support on behalf of Department of Education Commissioner Bret Schundler (his successor in the Jersey City mayor’s office), said Christie didn’t create the problem that led to $27 million in projected cuts to this year’s Jersey City school budget.

“The reality is they didn’t face the problems, I don’t blame Chris Christie,” said McCann. “It’s the condition of the economy and runaway costs. The problem is the government costs. They were giving raises like crazy – teachers getting astronomical raises. You just can’t keep spending at that level.

“I supported Corzine for governor, but I don’t see any irony in backing Christie in this. If Corzine got elected, the same problem would exist. Corzine let the millionaires off. The tax ran out when Corzine was governor, Dec. 31st. If the Democratic legislature wanted to enact the tax, it woud have stayed in existence. They didn’t, so don’t blame Christie. The only person you can blame is who was in power when it lapsed. You think Christie’s going to be taxing his supporters? That’s not the logic of politics.”

McCann said he’s not worried about the teachers’ efforts to dislodge him from office come April 20th, the local school board election.

“The people in Monmouth County can’t vote in this election,” he said. “I spent $248 last time I ran, three years ago – up against $50,000 poured in here by the teachers. That’s documented. I won. I want them out there. They’re just making my case a better case. The more they stir it up, all the other people paying tax increases are saying, ‘McCann is fighting for me.’ I didn’t create the situation they created it and now they’re giving me free publicity. The teachers put me on the front page of yesterday’s newspaper.” 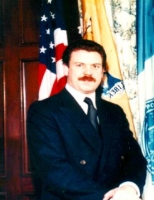