“It is yet another slap in the face to County residents for Governor Christie to nominate Bob Yudin to the NJSEA two days after acknowledging he doesn’t care what our residents think about the Governor’s plan to repeal the Blue Laws,” McNerney said.

“The governor already told the Record he has a legal opinion to allow shopping in Bergen County in violation of the Blue Laws, and Bob Yudin clearly has no intention of fighting him on behalf of Bergen taxpayers,” the county executive added. “The last thing the NJSEA needs is a member who supports the latest money grab aimed at Bergen taxpayers, particularly when the Governor is championing shopping on Sundays at Xanadu.  I have been fighting to stop the Governor’s proposal and the traffic congestion and overcrowded streets that would surely come about at the expense of County residents, so I am respectfully requesting that Bergen County’s Senators block BobYudin’s nomination.”

Yudin told PolitickerNJ.com last week that he would favor the governor’s proposal to scrap blue laws only if the issue first went before the voters. McNerney’s allies jeered back that the Republican knows a referendum can’t be arranged prior to the governor’s FY 2011 budget signing. 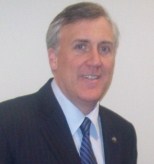