TRENTON – Likening the City of Trenton to a landlord and the governor to a tenant, Mayor Doug Palmer in a special address at City Hall this evening demanded that Gov. Chris Christie restore state funding to the capital city.

“If you don’t pay your rent, can you get away with telling your landlord to get out of your face and stop begging for your rent?” Palmer asked a crowd packed into the City Council chamber.

“Trenton isn’t begging for a single thing,” said the mayor. “We’re trying to get the state to pay its fair share in taxes. …The state must pay or the state must go so others will pay.”

Leaving office at the end of this term after 20 years as mayor and grappling with his last city budget – this one $210 million ($105 million of which is composed of salaries, 70% of which is dedicated to police and fire), Palmer broke the Christie issue down for a roomful of recognizable politicos. His departure dislodged three at-large council people, who are now running for mayor, which in turn freed large sections of town to run for their vacant at-large seats.

At least every other face in the crowd was a candidate, campaign manager or surrogate.

“Forget about layoffs,” Palmer said of proposed Christie cuts totaling $42.3 million. “We won’t have a city.”

If the state provided its fair share of taxes that the 7.5 square mile Trenton loses by virtue of having 2.5 square miles cemented with government structures or attendant government land, the city would receive $155 million.

Instead, the limped in Fiscal Year 2010 with $87.6 million in aid and now stares at the prospect of Christie’s proposed 2011 cuts, which would leave the city with $45 million, Palmer said.

But the rest of elected officials at the Statehouse must get the message, he argued.

“Call, email, write to key members to let them know we want Trenton’s funding restored,” Palmer told the crowd. “We are all aware of the State of New Jersey’s fiscal shambles. I agree with many of the governor’s proposals. But we just cut $21 million from our budget. We see the reality of the situation. No one should fault the governor for trying to achieve efficiencies, but it gets confusing when a governor decides he should not pay rent where he lives.

“I don’t know where the governor thinks he lives,” the mayor added. “Since 1790, the state capital’s home address has been Trenton, New Jersey. That to me means our city is where he lives. If you are a taxpayer here, that makes you his landlord.”

Thirty-thousand out of town residents arrive and leave everyday, said Palmer. The State of New Jersey occupies the most desirable tracts of real estate in the city.

“Is there any reason for anyone to believe the state should have a reduced obligation?”

The faces of some residents who have become Palmer’s hardened political enemies over his two decades in power stared stonily back at the man in the suit at the podium in front of the working class mural on the wall behind the rostrum.

The applause carried on unabated as Palmer ended, walked around to the front of the podium, extended his arm, and pointed his index finger in the direction of the Statehouse.

He froze there momentarily, leaning forward, and the gesture redoubled the applause. 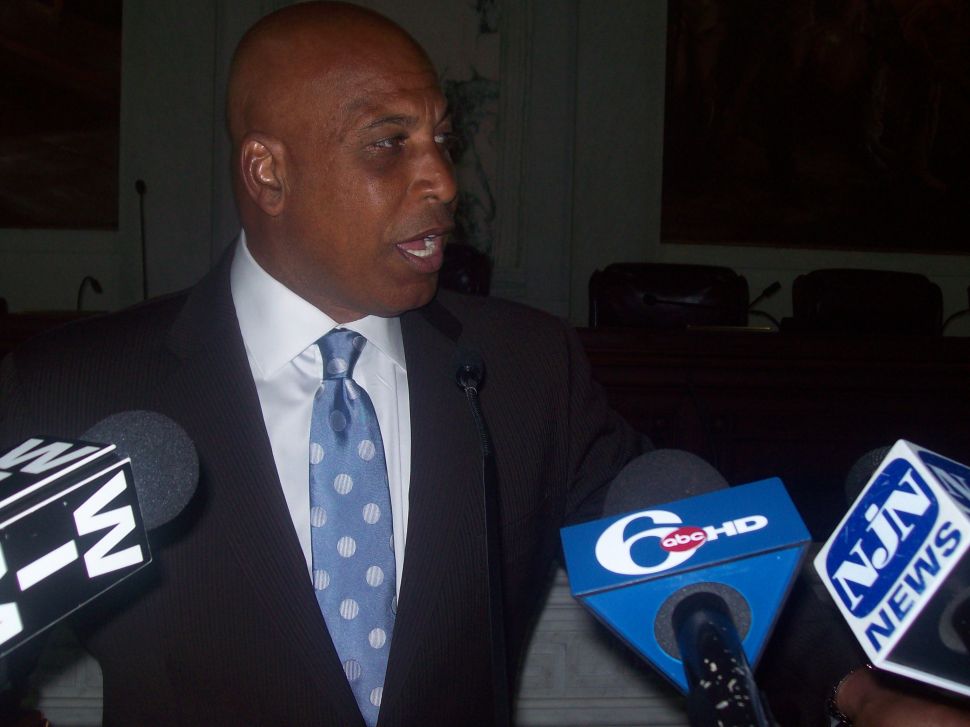