“A total coincidence,” says Sarlo, when asked about the symbolic import of kicking off these budget hearings in his home county, which happens to be the crucible for a contentious county executive’s race, where Democrats are trying to hold onto power in the face of a Christie-infused GOP.

Dems say Christie’s state funding cuts – including $821 million statewide to schools and $445 million to muncipal aid – have brought their party off the cold slab just in time to fight off County Clerk Kathleen Donovan, a Republican intent on taking the seat of County Executive Dennis McNerney.

“We scheduled this a while ago, and it’s just a coincidence that the governor’s budget hit Bergen the hardest, in terms of cuts to municipal and school aid and then the Blue Laws,” says Sarlo as he heads to the front of the room here at Bergen Community College.

The senators take their seats and Sarlo begins the hearing.

“We’ll have an opportunity at some point today hopefully to talk about just Bergen issues with a group separately,” says the budget chairman.

Then Sheriff Leo McGuire, up for for re-election this year on a ticket with McNerney, grabs a seat facing the committee and eviscerates the local impact of Christie’s proposed budget.

He praises the Morris-based state Sen. Anthony Bucco (R-Boonton) for being from the wealthiest district in the state – a dig, given the cuts sustained in Bergen.

“To Trenton, Bergen County looks like a treasure chest ready to plunder,” says the sheriff, who protests what he says will be a forced alteration of law enforcement operations as a consequence of the budget cut proposals.

“Trenton uses Bergen COunty as a piggy bank,” McGuire adds. “I would urge members of this body to stand up for our quality of life and the residents of Bergen County.”

State Sen. Robert Gordon (D-Fair-Lawn) next assumes the chair in front of the committee and backs up McGuire’s outrage with low-key facts and figures.

Bergen sends the most money to Trenton and sustains a disproportionate share of service cuts.

“The average cut in school aid in Bergen is 41%,” says Gordon. “Of the 62 district set to lose all of their school aid, 27 are in Bergen County. Nine school districts in my district will lose 50% of their aid.” 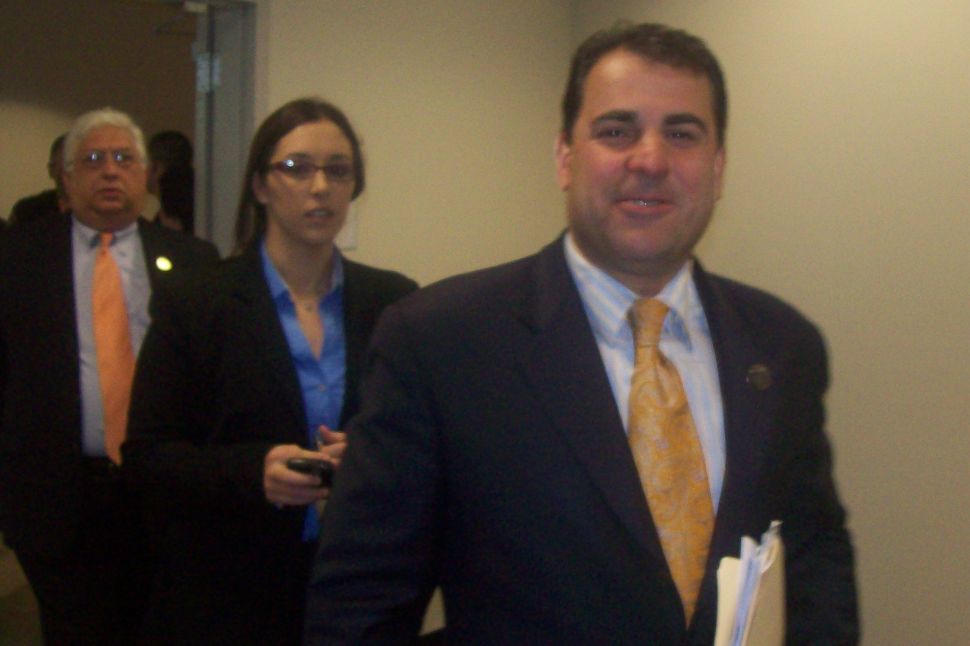