“I think the general feedback is Governor Christie has to make tough decisions,” Webber told PolitickerNJ.com. “This is someone who ran for office last year who said this was what he was going to do, and now he is cutting spending. People have been asking us to cut spending for years. For that, people appreciate him.”

An Assemblyman from Morris Plains, Webber said in his own district he has heard both the grinding of teeth from superintendents grappling with local budgets minus deep cuts in state school aid, and residents happy to help solve the state’s structural deficit.

“People recognize it’s difficult to put budgets together on short notice but that’s just the nature of the budgets,” said Webber. “This year is nothing they haven’t faced before in terms of the timing. School districts are coping, and some are making difficult choices. School board members are extraordinarily capable.

“Several school boards have approached teachers’ unions to discuss wage freezes and contributions to healthcare benefits, and several of our districts will have achieved cooperation from stake holders to get there by other means.”

In any case, “Raising taxes is a non-starter,” said Webber, when asked about a compromise that might include union-re-negotiated across the board school employee salary freezes and reinstatement of the millionaire’s tax.

“Quite simply, every level of government will have to get by with less. The state is cutting its spending by nine percent, schools five, and municipalities by 2.5%. It’s not easy, but it’s doable.”

Webber said Christie has been straight-forward in explaining his cuts to N.J. transit, which would result in a 25% fare increase.

“N.J. Transit has to reform itself and get its house in order,” the chairman said. “Like every portion of government, it will have to do with less. Part of its solution is to raise fares, but we simply can’t afford to subsidize.”

“I have met with (prospective GOP opponent) Jon Runyan, and he is a lot like Chris Christie in that he is exactly what he presents himself as: a blue collar guy who says what he means and means what he says,” said Webber. “Jon Runyan connects on a retail level that is unique. Of course, he has extraordinary accomplishments athletically. He knows what he’s about, knows where he is coming from, and will make an excellent contrast to John Adler.”

“He’s just far, far, far to the left of a district that voted for Chris Christie last year,” said Webber. “The healthcare bill that the Democrats slammed through Congress late at night on a Sunday using every procedural move in the book, is not consistent with Americans. It’s bureaucratic intrusion on patients’ and doctors’ decisions and contains numerous tax increases and individual mandates to purchase health insurance. It’s just a monumental lurch to the left, representing a solution to a problem that really didn’t exist.

“I’m a proponent of sensible healthcare reform but what Frank Pallone and Barack Obama did was look at this issue that needed improvement and decided that what was required was wholesale replacement,” the GOP chairman added. “Frank Pallone is so out of touch with his constituency, Diane Gooch can really drive that message contrasting her views.”

A millionaire newspaper publisher from Rumson, Gooch must first get through a primary, but Webber is confident Gooch would have the goods in a matchup with Pallone.

“Diane Gooch has her feet firmly planted on the ground,” he said. “She has middle class roots. She married an immigrant who started a business, and now she and her husband are enjoying the fruits of that labor. She is the mother of three young men – if that alone doesn’t make you worthy of Congress, I don’t know what does. She is a business owner, whose husband is an English native. She has seen the effects first hand of socialized medicine.

“Diane Gooch is an incredibly qualified candidate who is going to connect with people in her district business she has a great story,” Webber added. 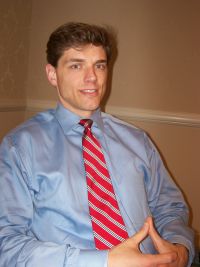