“Each one of these is a hullabaloo show – each candidate brings his own little audience, it’s the same City Hall crowd that attends the meetings -a  stacked holler and cheering section worse than the Tea Party,” said Bell, who strongly disagrees that he fouled by not attending an event packed with 250 people, all hearing his adversaries debate issues confronting the Central Ward.

“They’re a waste of time,” Bell said of the forums.

He does intend to go to the one televised debate, but otherwise, he says he will keep focused on the ground-game campaign.

But sprouting legs on the Internet in anonymous emails penned by Bell detractors since pal turned political rival former Mayor Sharpe James returned hom from prison last week is the theory that the councilman – once seen as a lock for re-election in Newark’s Central Ward – is in a dogfight.

And buttoned into top coats on the steps of the Sacred Heart Cathedral on Saturday, political insiders chewed over the May 1th races in Newark.

At-Large? John Sharpe James – son of the former mayor – making it a race.

No one would have thought it added up to much as recently as a month ago. Too many people running against Bell, who in addition to his own brand since winning a special election in 2008 with a caampaign contribution of $5,000 from Mayor James in hand, added Mayor Cory Booker to his list of allies.

But there were the insiders talking about how Darrin Sharif, son of South Ward political consigliere Carl Sharif, has a shot.

And Richard Whitten, jettisoned from the Booker administration – has a shot.

Moreover, one insider said Charon Motayne, a community acitivist running on an opposition slate with retired Judge Clifford Minor, had an especially strong performance at last week’s debate – along with Sharif.

No disrespect, says Bell, but he’s confident in outright victory on May 11th.

The rumor whirling about him as the bad guy behind the wheel in a hit and run is absolutely false.

“I was in an accident a couple of months ago,” Bell acknowledged. “A kid ran into me on a skateboard. This was no hit and run. I was at the scene for an hour and a half hit. The kid was fine. At first, he jumped up and tried to run, but I told him not to go anywhere. He had a scraped kneecap. This was at the corner of Irving Turner Boulevard and 18th Avenue. We sat there, I waited with him. Everything was filed, standard, in the police report. No charges. Fine.

“I just wish today was May 11th,” the councilman said with a laugh. 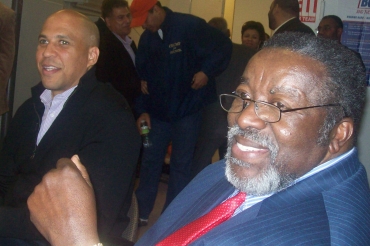