In coming close to defeating Jon Corzine in 2000 but finally losing, Bob Franks inspired a close circle of friends and advisors, who would go on to achieve in politics their own successes that ultimately became part of Mr. Franks’s legacy.

They all remained close to their mentor.

A short time ago this morning, DuHaime isssued a statement as the Franks family spokesman.

“With his wife, Fran, by his side, former US Congressman Bob Franks passed away last night at Memorial Sloan Kettering Hospital in NY after a battle with cancer,” DuHaime said.

“Bob’s love of New Jersey and of our country resulted in a meaningful life dedicated to public service, as a state Assemblyman, United States Congressman, state party chairman and finally as an advocate for affordable quality health care for all. His generosity of time, care for others and boundless spirit inspired a generation of those in public life. While his passing deeply saddens all who knew him, we have been so enriched by having had him in our lives. Our thoughts and prayers are with his wife, Fran, and their three wonderful daughters, his mother, June, his sister and brother-in-law, Judy and Jeremy, and his niece, Mary Hannah.”

Baroni said he had lost a family member.

Champion of a relentless door-to-door style in the Democratic-leaning 14th District that became known as “the Baroni model,” the former state senator attributed his politics directly to Mr. Franks.

“That’s who I learned it from,” Baroni said. “My team was his team: Mike DuHaime, and Bill Stepien, who had been an intern for Bob.

“He was a political mentor,” he added. “Bob taught me not how to be a good candidate but how to be with people. Bob Franks wrote a chapter in my life called politics. He set expectations and we wanted to live up to them and exceed them.”

The day after Baroni graduated from law school in 1998, he drove to Union Township for a political meeting with Mr. Franks, who was preparing his U.S. Senate run. Baroni served as the candidate’s lawyer during the campaign.

“Thirty years from now, people will still talk about that campaign.”

Mr. Franks’s loss to Corzine by three points would be his last long runway bid as a candidate.

But he went door-to-door with Baroni three years later, during the latter’s 2003 Assembly race, which Baroni won.

“I would have marched through shards of broken glass for Bob Franks,” Baroni said. 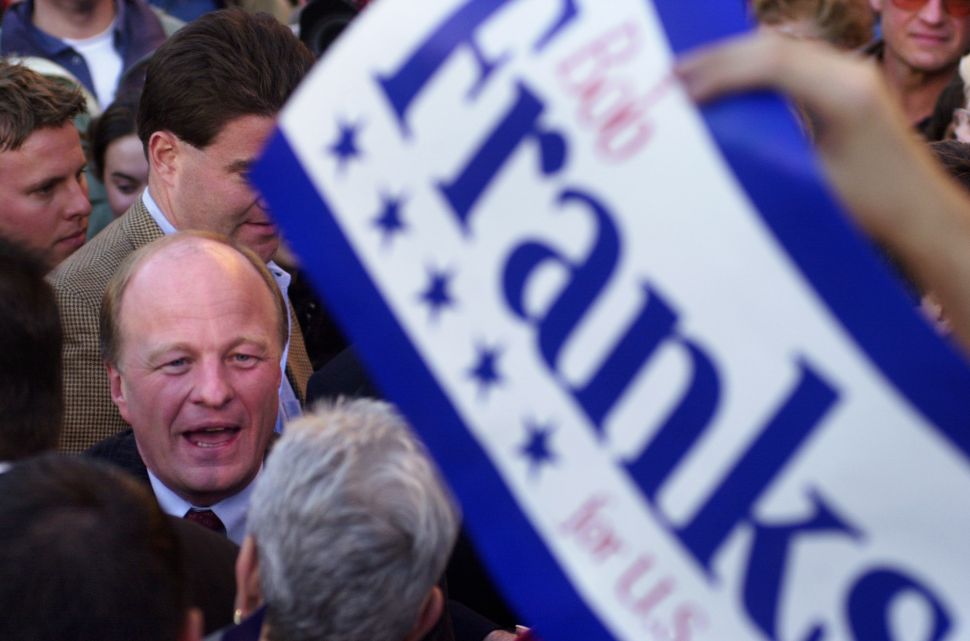