NEWARK – Driving an up-tempo message of unity, Mayor Cory A. Booker stood at the pulpit of New Hope Baptist Church this morning and launched his campaign for re-election with an appeal for support for his entire city council slate.

“The campaign has begun; let’s get out there and bring our city together,” said the mayor, whose knack for public-private partnerships has yielded security cameras monitoring eight square miles, the first AIDs housing in a decade, and a profusion of big name contributions from people like TV behemoth Oprah Winfrey, who forked $2 million over to the city for affordable housing.

A landslide victor in 2006, the 40-year old Booker seeks a second term as a heavy favorite to win re-election against former muncipal judge Clifford Minor, and today dug in with the argument that he needs his entire nine-person council team back in office with him.

“I do not want to have same challenges that our president has in Washington, where he has both houses and wants to pull the country in a dramatic direction, but can’t even get a judicial appointment out of his conference because of the in-fighting and name-calling and the partisanship,” said the mayor.

“Our city is being talked about all over the country,” he added. “What we have accomplished would not have been accomplished with the mayor alone.”

In his buildup to Booker in front of a crowd that included State Democratic Party Chairman John Wisniewski, Essex County Executive Joe DiVincenzo, Jr., and North Ward Democratic leader Steve Adubato, Sr., the Rev. Joe A Carter acknowledged a discomfiting environment, but argued for the electric Booker as the right man as mayor.

“People say these are depressing times, but I chose rather to think of them as exciting times,” said Carter, a plug for Booker the media swashbuckler and global-sized Newark ambassador.

Most political observers here have dismissed the low gear Minor’s campaign as a fetal position forward action, identiying instead the most opposition energy coming out of the candidacies of Baraka and James, son of former Mayor Sharpe James. So it was no accident that Booker at the pulpit today identified South Ward Councilman Oscar James II and cheerfully unassuming At-Large Councilman Carlos Gonzalez as his “left and right arms.”

But after attending a memorial service for South Ward community leader Mary Singleton, Minor from afar told PolitickerNJ.com his grassroots strategy is working.

“The momentum has shifted, and it’s because of personal contact,” said the challenger, who objected to ongoing early efforts by on-the-ground Booker allies to echo Republican Gov. Chris Christie in blaming low test scores at Central High School on Baraka, who serves as the Central High principal.

Minor contends that Booker in failing to present a city education action plan, and the state Department of Community Affairs in failing to take up the slack, must absorb the lion’s share of blame in properly administering funds for Central High School and other troubled Newark schools.

If Minor is convinced he has grassroots organizing ability – “We collected 2,200 petitions in a week, and the mayor got 2,400 after being in office for four years” – Booker possesses one dominating counteracting ally.

At the church this morning, the front-and-center presence of Adubato today underscored the North Ward’s importance in the May 11th election.

Although Adubato acolyte North Ward Councilman Anibal Ramos doesn’t face serious opposition, sources say the ward’s weakened but still vaunted political organization will be in gear to blunt whatever South Ward support Minor – and particulalry Baraka – are able to muster on the opposite side of the city.

Certainly Booker and his team hope their battered but still surviving alliance with U.S. Rep. Donald Payne (D-Newark) presents another obstacle to Baraka/James/Minor.

“The Paynes are our Kennedys,” said Booker, giving a nod to At-Large Councilman Donald Payne, Jr.

Regarding the mayor’s failed 2008 district leader effort against the Paynes, the councilman said as far as his family’s concerned, that bad blood’s in the past.

“They have said to us those days are over, and we will take them at our word,” Payne said.

The elder Rice has organized the ward since the 1970s and figures to be a boon to Minor, upticking the numbers his mayoral choice starts with in the South Ward.

That leaves the Central as a pivotal battleground, with Central Ward Councilman Charles Bell critical in the rawest political terms for the Booker Team.

“I’m telling you right now, I can’t go through hell without Charles Bell,” declared Booker as a roar went up from the senior citizen crowd for the old school Bell.

Trying to stare down the solo act candidacies of former City Hall administrator Richard Whitten and political scion Darren Sharif – but also mostly confident the two younger men will cancel each other out of contention – Bell weathered an ealry salvo ths week when an anonymous email banged him up over incorrect resume information on the city website.

A contrite Bell said he had no knowledge of the official city site’s inflation of his credentials to include a degree from Rutgers University.

“After it was brought to my attention earlier today that there were some inaccuracies included in my biographical information on the City’s Web site and in other City publications, I have reissued my correct biography to be included in all future publications,” Bell said in a statement. “…My staff and I will continue to research how this happened, to ensure it does not happen again, and to make sure that Newark ’s citizens have a thorough and correct profile of my background and qualifications.”

A second anonymous email again pumped up the issue.

“The NJ Code of Criminal Justice states that an elected official who ‘makes, presents, offers for filing or uses any record, document or thing, knowing it to be false, or with the purpose that it be taken as a genuine part of information or records’ commits an illegal offense and is subject to being ousted from office.'”

Bell today chuckled off the incident as tractionless opponents trying to bloody him early.

For his part, Booker re-asserted his delight in being huddled up with his former adversary.

“We fought many political battles, but he has my allegiance on such a deep level,” Booker said. “If you vote for me, and don’t vote for Councilman Bell, I don’t want your vote. …Charlie and I are partners. We’re going to have a friendship for life. His expertise is critical.”

As he bounded out of the church towing a battery of supporters and inner circles operators, including his mother, who introduced him at today’s kickoff, Booker woudn’t comment on the specific local impact of state budget cuts.

“We’re having emergency meetings now,” he told PolitickerNJ.com. “We’re still waiting for the legislature. There are so many unknowns right now. It’s going to be a very difficult time for our schools, our hospitals and for the ciy. We’re really going to have to come together and find solutions to get through this.

“The good thing is we’ve been able to raise over $100 million in private dollars for everything from public safety to education to housing. We’ve been able to demonstrate our ability to be innovative and fund our way through difficult times.”

James wasn’t surprised that Booker won’t talk about the budget, given the structural problems Newark faces and what he sees as exorbitant self-promotion.

“We have to reduce spending, which has been out of control,” said the at-large council candidate running on Minor’s Newark’s Choice team. “The situation has been worsened by all the new hires that have been brought in and the exuberant salaries they have received.

“This is an administration that had a surplus of $80 million, for which it got an injunction so that they could put it back into the budget,” added the candidate. “They have forced tax increases every year and simultaneously decreased services and increased furlough days; and now there are more layoffs on the horizon. This is an administration that has charged up $3 million for its city website and $10 million to law firms to litigate cases that should have been handled by the corporation counsel.”

“This leadership is the best we have right now, we should stick with it,” said Assemblywoman L. Grace Spencer (D-Newark).

“Public private partnerships,” echoed DiVincenzo, when asked about Booker’s record, affirming the mayor’s central argument about his uniqueness as Newark’s leader. “We have a good partnership.”

Asked to bash the other side of the equation – the Minor Team – DiVincenzo refused. “Of course, John (Sharpe James) works for us,” he said. 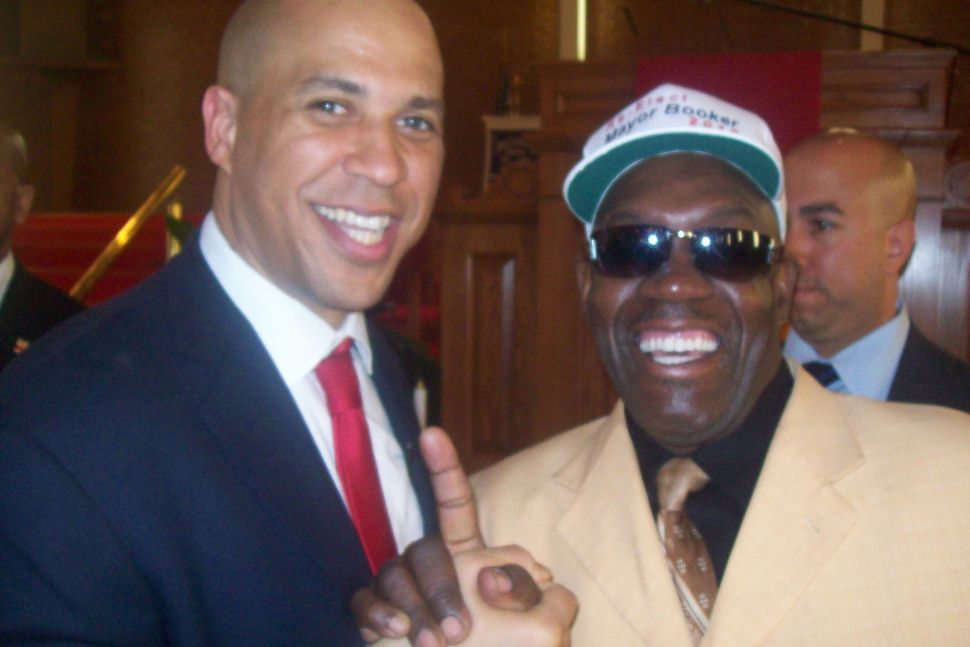