SEA BRIGHT – Two days after he weathered one of the most contentious political brawls in recent statewide history and by the reckoning of most came out on the winning end over the New Jersey Education Association, Gov. Chris Christie praised former Gov. Tom Kean – the consummate diplomat – as the greatest governor in New Jersey history.

“Tom Kean has always answered the call and there’s no one I’d rather spend Earth Day with than Tom Kean,” Christie said of his mentor, who’s celebrating his 75th birthday.

As a legislator 40 years ago, Kean helped create the state Department of Environmental Protection, and beamed when Christie said he was opposed to allowing liquified naural gas terminals off the New Jersey coast.

“For as long as I am governor, this administration will oppose any application for liquified natural gas located off our coast,” the governor announced to cheers.

“Thank you for your work in protecting this ocean,” Kean told his protege, who over decades ago ran up the Kean driveway in his teens to volunteer his campaign services.

“This administration knows that when you improve the environment, you improve everything else,” the ex-governor declared to the crowd assembled outside at the Surfrider Beach Club. “It’s not just because we love the ocean, but because you help the economy.”

“Their styles may contrast,” O’Scanlon said. “Certainly they have different ways of getting things done, but their goals and values are the same.

“For good or ill, society has changed since Tom Kean was governor,” O’Scanlon added. “To be heard above the din of our society today, we need someone who’s a little in-your-face. But make no mistake, both these men – each in his own way – are all about commitment to fixing government.”

Grabbing a chair at a table above the beach and accompanied by his youngest daughter Brigit on “take your kid to work day,” Christie also signed a bill enabling solar farms to be built on land designated as open space.

“This is green cover,” Tittel said of the Christie-Kean spectacle. “It’s easy to have a press conference in New Jersey saying you’re against drilling in Virginia, but there’s nothing here today that would anger the Chamber of Commerce or ruffle developers. Bringing Kean here is good for Christie. It’s his way of saying he’s more like Kean than he is like Christie Whitman.” 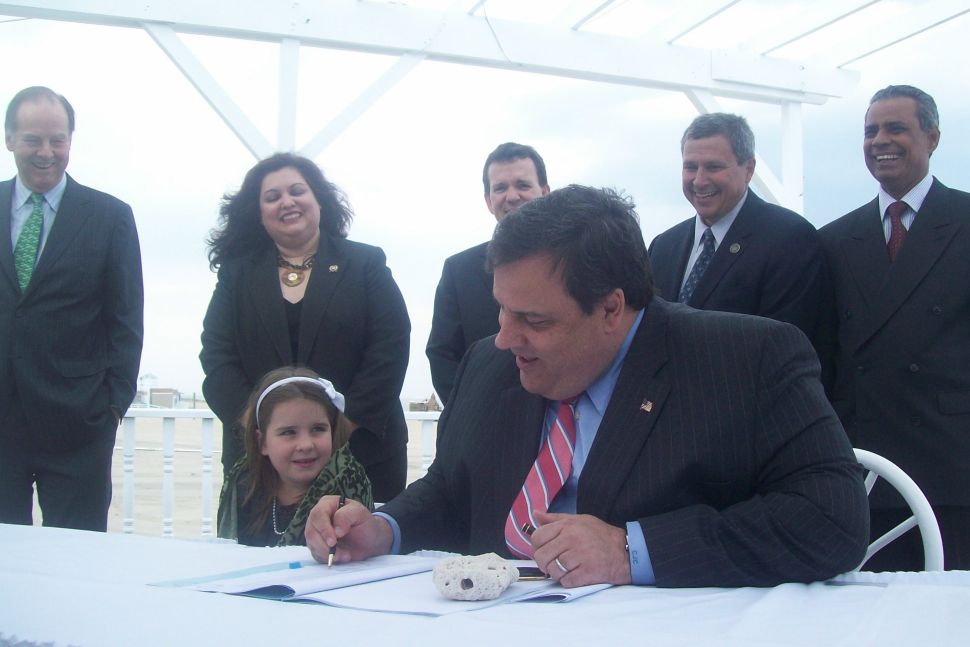