The last two New Jerseyans to be in serious contention for the presidency were Bill Bradley in 2000 and Steve Forbes in 1996 and 2000.  Bradley, who served in the U.S. Senate from 1979 to 1997, passed on a chance to run in 1988 and lost his place in line after nearly losing his seat to Christine Todd Whitman in 1990.   Al Gore beat him 50%-46% in the 2000 New Hampshire Democratic primary, and Bradley dropped out after losing nineteen consecutive primaries to the sitting vice president.

Forbes spent $75 million of his own money in his two bids for the GOP presidential nomination.  He won the Arizona and Delaware primaries in 1996, and his 2000 campaign fizzled out early after finishing a distant third in early primaries behind George W. Bush and John McCain.

Republican U.S. Sen. Clifford Case ran in the 1968 New Jersey presidential primary as a favorite son – some though as a stalking horse for New York Gov. Nelson Rockefeller — but 18 of his 40 delegates bolted on the first ballot after a group of GOP leaders led by Nelson Gross decided to back Richard Nixon for the nomination.

Gov. Robert Meyner gave serious consideration to a presidential candidacy in 1960, announcing three months before the Democratic National Convention that he was available to be drafted for the nomination if party leaders were unable to agree on a candidate.  Meyner was nominated at the convention by U.S. Sen. Harrison Williams and won the support of 43 delegates, including all 41 from New Jersey, despite considerable speculation that as many as 35 New Jersey delegates were prepared to abandon the sitting governor and back John F. Kennedy for the nomination.

When Gov. Woodrow Wilson sought the Democratic presidential nomination in 1912, he had the backing of 24 of the 28 delegates from New Jersey. 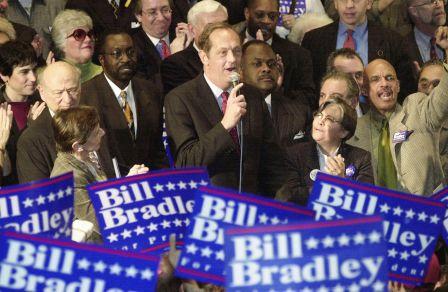