“There’s always going to be a Rice in the parade, and whether it’s your father, or you, Ron, I want to be there walking next to you,” Codey told the councilman in front of a small crowd of Rice backers, including U.S. Rep. Steve Rothman (D-Fair-Lawn), U.S. Rep. Frank Pallone (D-Long Branch), and state Sen. Majority Leader Barbara Buono (D-Metuchen).

After the event, PolitickerNJ.com asked Codey if he is prepared to endorse Newark Mayor Cory Booker for re-election. Rice is running on the Booker Team in the May 11th election.

“I’m not getting involved in the mayor’s race,” Codey answered.

The lack of enthusiasm for Booker reflects a history.

After chummy relations for a number of years, Codey leaned on Booker for support last year as Codey battled to remain the senate president in the face of a challenge from an ultimately successful Senate President Steve Sweeney (D-West Deptford).

Presiding over a legislative district that contains a small portion of Newark’s West Ward, the state senator’s reluctance to endorse Booker can be tracked back directly to that crisis point last fall when Sweeney mobilized against Codey and Codey urged Booker to join a united front of Essex County mayors committed to Codey.

Booker agreed to the pledge, then withdrew his support when the math in the Senate Democratic caucus didn’t add up in Codey’s favor. 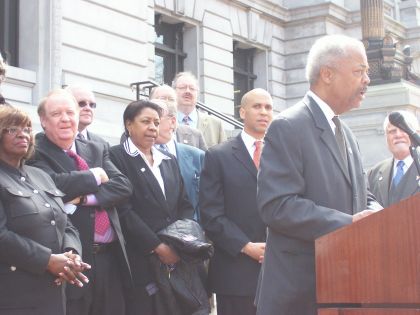