NEWARK – When the Greyhound bus finally pulled into the Newark bus depot and the big, impatient crowd broke for the front door as it opened, former Mayor Sharpe Jones appeared and stopped on the steps before descending, waving and smiling and someone shouted incredulously, “It’s not him! It’s not him!”

Home from a Virginia prison to serve the remainder of his 27-month sentence in a halfway house, James waded into the crowd, reaching for hands that lunged at him in welcome. The bodies kept coming, swelling around the slender familiar figure who swayed in the street while police hurried in to prevent too much pushing and shoving.

Among the people stood a much different public figure, the man who wants to be mayor, who wants to oust James’s old antagonist Mayor Cory Booker.

Former Judge Clifford Minor, apparently permanently lowkey, who sees a crowd and doesn’t see opportunities to shake hands or pull out a bullhorn to shake a captive audience, stood mostly quietly for two hours, blended into the background at the bus station, waiting with the others for James to come home.

Men went to him and shook his hand.

“I wasn’t at the trial, so I’m not going to second guess the jury,” added Minor, refleccting on James’s 2008 trial. “We all know juries are special; each jury is very, very different, but we can lean on the words of the judge  at sentencing. The judge felt that the sentence that he gave and what they were asking for was very different.”

There were plenty of Minor for mayor signs in this crowd, but many more Sharpe James signs, including several that read, “Sharpe James for Governor.”

The roar of engines sounded shortly before the Greyhound bus pulled in, and it was the motorcycle escort team lead by James’s son, At-Large City Council candidate John Sharpe James, decked out in a desert-colored denim jacket and carrying a black helmet under his arm.

The crowd – including a lot of TV cameras – mobbed him as a warm up to his father.

Earlier, in front of the Key Club on Park Place, the younger James mobilized the cyclists for charge down the turnpike to meet the former mayor.

“We can go with you – we can film you,” said a cameraman filming for the series “Brick City.”

James smiled back as he straddled his bike.

“No, you can’t,” he said, and revved, the more than two dozen other cyclists falling in behind the Afghanistan War veteran.

At the bus depot, which is attached to Penn Station, the crowd of joyous James welcomers swelled with anticipation, reaching a pitch each time a bus rounded the corner on Market, then settling in again to a murmur when the bus wasn’t the one carrying the former mayor.

Hands in pockets, under a cap, stood an unobtrusive Amiri Baraka of the South Ward.

“Don’t refer to me as the last surviving beatnik,” he said. “I’m the last poet laureate of the State of New Jersey.”

His son, Ras Baraka, a former deputy mayor in the James era, is now running for the South Ward council seat against Councilman Oscar James II.

“People are a little upset about the verdict that went down,” said the younger Baraka, shortly before the former mayor’s arrival. “You may not agree with Sharpe all the time, but people disagree that he should have gone to jail because of the trumped up charges they had, and the way both parties played their political stunts to benefit this governor and this mayor.”

Newark activist Donna Jackson said, “Hopefully all of them,” when asked if any of the Booker Team appeared vulnerable.

She followed that up with a groan.

“Bergen – for a fundraiser,” she said, when asked if she knew where the mayor was tonight.

“The jury passed unanimously on the charges against Mayor James,” said the governor. “He has now served his time. He will finish serving his time in a halfway house. He’s paid his debt to society for those things that he was convicted of.

“You don’t hold personal animus or venom for someone you prosecute,” Christie added. “You’re doing your job.”

When James’s Greyhound finally pulled in and he climbed down and stepped onto the street amid the joy, he was buffeted briefly before he ducked his shoulder into an SUV, bound for the halfway house in Newark.

“He’s going to be the spark to Clifford Minor’s campaign,” said Victor Zamora, an independent candidate for an at-large council seat.

“But you can’t deny that Sharpe James – whatever you thought of him as mayor – loves Newark,” said the candidate. “That’s why all these people are here tonight. What do I think of him? It’s like I say all the time. Jimmy Carter was a great humanitarian. Do I want him as my president? That’s another story.” 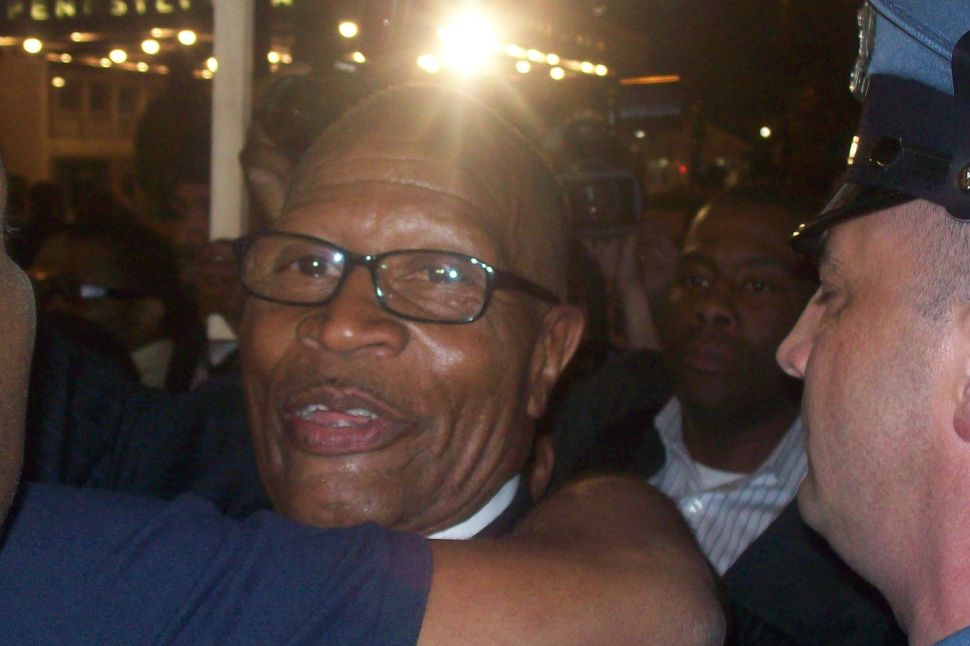