“I have the vision to support the leader he says that he supports,” Glenn told PolitickerNJ.com. “Although Joe is good for sound bites, his action does not reflect what he says he supports. His concerns for the reform movement are only encountered as a person that continues to do the opposite of what he says.”

In heavily Democratic Essex County, Glenn is laughed off in opposition circles as a no-hoper against DiVincenzo – a warm body plug-in to the process by Republican County Chairman Kevin O’Toole, who’s friendly with the Dem county executive. Although he won’t formally launch his campaign until late May, the candidate’s “Herbert Glenn for Essex County Executive” has three people who count themselves fans.

DiVincenzo has no Democratic Primary opponent and possesses massive organizational backing. His statement yesterday that he agrees 95% with what Christie is doing as governor prompted no prompt rejoinder of distaste from his own party.

But Glenn, a Newark resident and veteran of small-bore Republican events last year in which Jon Corzine supporters mobilized on the outskirts and badgered and harassed him for supporting Christie, argues his better claim to Christie-style change.

“Many of the statements that he has made will come back to haunt him because he is not thinking when he speaks,” Glenn said of DiVincenzo. “It all sounds good for the moment, but in reality, it’s the same ole song. ‘Say it ain’t so Joe’ – He has admitted to balancing the county budget on the backs of indigent people. He can’t escape that. Christie is about changing the process, rooting out corruption and creating a future for New Jersey. ‘We are New Jersey’ Power to the people!”

In a conversation yesterday with PolitickerNJ.com, Divincenzo said his commitment throughout his two-term tenure as county executive and into the future is to the poor and working class residents of Essex County. 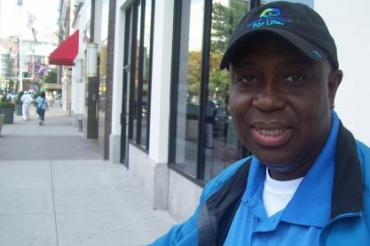