BOONTON – Gov. Chris Christie came here today to field the tough questions from a crowd of students at the local elementary school who early looked intent on tripping up the usually oratorically agile chief executive.

“Do you know your Chinese zodiac?” a fourth grader demanded of the governor.

When Christie explained that he was born in 1962, another student said that was the year of the rat.

“A rat? Jeeze, that’s not good,” the governor said to growing laughter.

An hour-long huddle-up with children in his home county gave the governor an opportunity to praise Boonton, where teachers agreed to reopen their expiring contract and accept a wage freeze in order to save 25 jobs, according to Superintendent Christine Johnson.

“Priority number one is to save teachers’ jobs,” Christie told reporters gathered on the front lawn of the school after his gym session with the fourth-graders.

As of today, 115 of New Jersey’s nearly 600 school districts had put forward some kind of wage freeze or concession package as a consequnce of the budget cuts, according to the governor’s office. Teachers only accounted for nine of those instances; the rest were administrators and support staff.

According to a late afternoon release issued by the governor’s office, the type of freeze varies district by district, according to data from the state Department of Education.

“Teachers in 11 school districts have accepted wage freezes for a year or part of the year (nine for a full year; two for partial year). In five school districts, teachers have accepted a reduction in pay,” according to the governor’s office. “Administrative and support staffs have been more willing to step up and take action to protect jobs and education resources: Of the 115 districts reporting wage freezes or reductions, administrators in 101 of them have taken a full-year or part-year salary freeze (most by far were full-year freezes).  Support staff in 40 did the same.  In more than 16 districts, administrators and/or staff took a reduction in pay.”

“Unfortunately, these figures illustrate the obvious: that the teachers unions overwhelmingly believe everyone else should share in the sacrifice, but they alone should be held harmless in the middle of this fiscal crisis,” said the governor. “The sense of entitlement is incredible and reveals the belief that they should continue, even now, to get 4 and 5 percent salary increases year after year and pay nothing for health insurance. Meanwhile, younger, less senior teachers are losing jobs. Frankly, I just don’t understand this; nor do I believe that the public does either.”

In the case of the north country town, home to state Sen Anthony Bucco, Christie cited an example of people (the superintendent, principal, and teachers) who understand the need for shared sacrifice.

“The superintendent and teachers’ union have a great relationship,” Christie said, by way of explanation, standing with Johnson and state Department of Edcuation Commissioner Bret Schundler. “They’re saving jobs. A lot of the teachers are members of this community, and teachers care about property taxes, as well. This group of folks trust each other.” 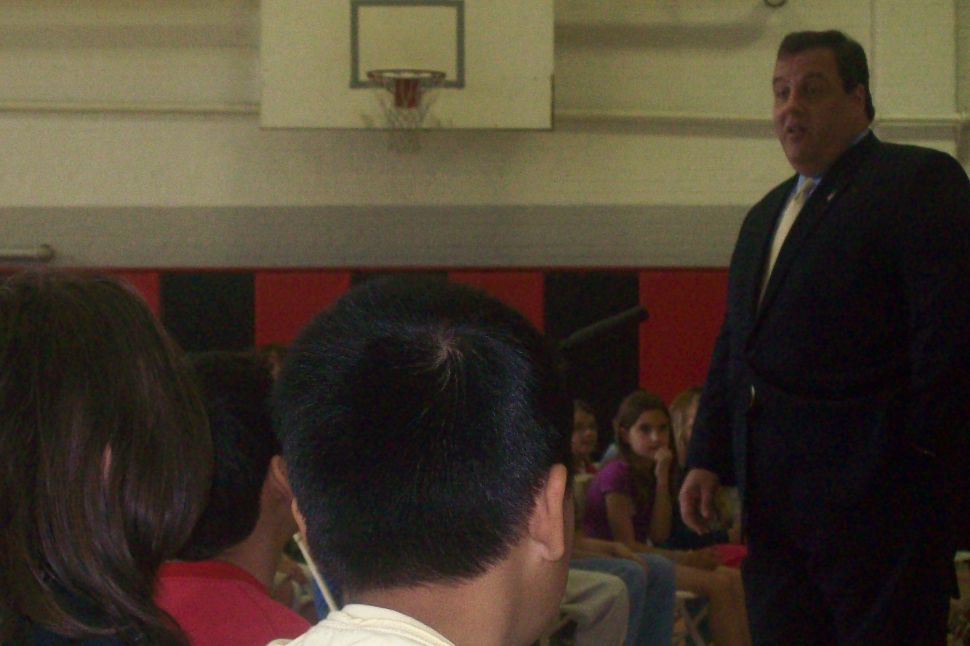