Thomas Howard Kean, arguably the most popular governor in state history, celebrates his 75th birthday today.  Kean was elected by just 1,797 votes in 1981, but won 70% when he was re-elected in 1985, carrying all 21 counties and losing just three municipalities: Audubon Park, Chesilhurst, and Roosevelt.  He is one of eight living former governors.

Kean began his political career in 1967 when he won a State Assembly seat in a politically competitive Essex County district.  He became Majority Leader in 1971, and was Assembly Speaker in 1972 and 1973.  He was the Minority Leader from 1974 to 1977.  Kean lost a GOP primary for Congress in 1974 (by 84 votes to Millicent Fenwick), and finished second in the 1977 Republican gubernatorial primary behind Raymond Bateman.

After a period as a New Jersey Network (NJN) commentator and Garden State Parkway Authority Commissioner, Kean won the Republican nomination for governor in a crowded field of eight candidates.  He defeated South Jersey Congressman Jim Florio in a general election that was not decided until after an exhaustive recount.  He won a landslide re-election in 1985, defeating Essex County Executive Peter Shapiro by 794,229 votes – the biggest plurality in state history.

After completing his eight years as governor – and after a brief flirtation with seeking the presidency – Kean began a fourteen-year stint as president of Drew University.  He also served as chairman of the 9/11 Commission that reviewed events leading up to the September 11, 2001 terrorist attacks on the United States.

The Kean family has been fixtures in American politics since the founding of the nation: John Kean, the governor’s great-great-great-grandfather, served in the Continental Congress from 1785 to 1787, and then held posts in George Washington’s administration; and Col. John Kean was an early supporter of the new Republican Party, and of Abraham Lincoln’s bid for the 1860 presidential nomination.  Kean’s grandfather, Hamilton Fish Kean, and great-uncle, John Kean, both served in the United States Senate, and his father, Robert Winthrop Kean, represented New Jersey in Congress for twenty years.  The former governor’s son is currently the Minority Leader of the New Jersey Senate. 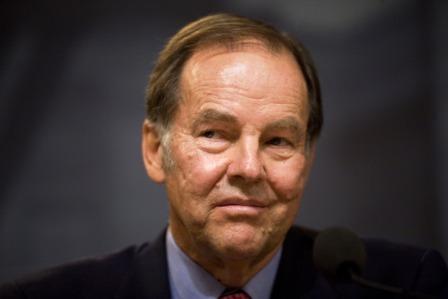